The artist states that her work, “deals with what is un-seen. Although I operate primarily within the terms of a landscape image, my work concerns aspects of social and personal description as well as the the transience of things. My images are in a sense sets for a potential drama, a scene of anticipation. As a photographer I see my role as that of re-evaluation. I look to isolation and detail in what is a constantly transient landscape.”

The opening chapter in this sequence, ‘Shadowland’, “documents recent occurences of disease in the landscapes of the UK farming industry”.

On the surface we are presented with a sense of permanence, tranquility, that these things have existed unchanged for many years, the fact is they have so far gone without record and the transformations within them have therefore been un-noticed. 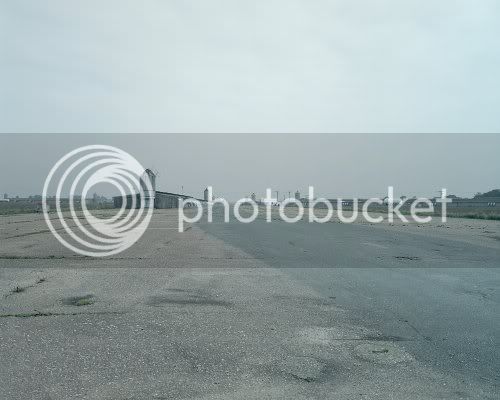 Then Oothoon waited silent all the day, and all the night,

But when the morn arose, her lamentation renewd,

The Daughters of Albion hear her woes, & eccho back her sighs.

William Blake, from ‘Visions of the Daughters of Albion’

In the second chapter we are shown several images of farmed landscapes entitled ‘Albion’. The historical and mythological associations of that word draw the viewer towards themes such as industrialisation, agriculture and recreation.

The English countryside plays host to a variety of activities and on one level the artist is simply confirming our preconceptions and stereotypes, the seeming focal point of the photographs, but as we gradually notice the signs of human activity, telegraph poles, fencing, dirt tracks, rusting machinery, these man-made additions become increasingly intrusive upon the naturalism of the images. We are forced to reconsider our opinion and question the artificiality of these landscapes: How much remains unmanipulated? How should we perceive of this space and relate to it both economically and culturally? These photographs finally are both highly critical and celebratory.

Landscape at Sunrise, from 'Albion'

Landscape with Pond, from 'Albion'

The contiguous cull of livestock arising from the 2001 foot and mouth epidemic resulted in the slaughter of millions of animals, for many a necessary consequence, the result of human mismanagement and inaction. For the most part these events have been put to the back of the public and media consciousness. However, the farmers whose livelihoods were destroyed and lands scorched still face massive economic and personal repercussions.

In the final chapter of this series, ‘Burial’, we are presented with three apparently innocuous images of the ground which resonate with fresh political and cultural meaning when we are told they were taken at the burial site of one of these culls. We must re-assess the landscape and everyday assumptions of the human impact on the environment. In an era acutely conscious of green issues the images highlight our dependence on collateral and the largescale creation of waste.

These are contradictory images; the artist plays with aesthetic rules and the judgements we base upon them. Mark Thompson suggests in his book Rubbish Theory: The Creation and Destruction of Value (Oxford: Oxford University Press, 1979) that: “it is tempting to suggest that the relationship between value (both economic and aesthetic) and rubbish is simple, namely that rubbish consists of that which has either no value or negative value.” Here we are persuaded to take the opposite view and to inherit our past mistakes, learning from them.

Further examples of the artist’s work, from this sequence and others, can be viewed on her website: www.alisonstolwood.com