Paul Henry | As If To Sing | reviewed by Jack McKenna 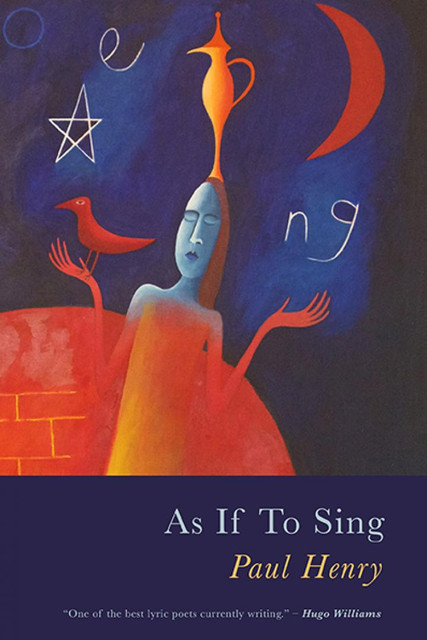 Sorrowful songs flow from Paul Henry’s newest collection, As If To Sing. These are careful, melodious poems that learn to listen for the watery current that carries love and loss together in our everyday lives.

The opening sonnet, ‘Tributary’, follows the speaker returning to where he ‘heard a woman’s grief in clear water’. A spring with a metal cup for passing walkers is the source of this music. As a tributary is a current that leads into a bigger body, the poem emerges from Henry listening to a woman on the radio describing her husband passing from COVID-19.

I knelt where her words had burrowed
Back inside the hill, her grief to my lips,
Her sorrow to my ear.

This collective feeling, however, is ‘a public grief turned private’. The words transcend their speaker and, in receiving them, nourish the listener like water.

This aqueous movement is enabled by its musicality, it is ‘a grief unconscious of its song’. But watch how the speaker kneels, carefully placing the ‘sorrow to my ear’. One must tune into the grief for its latent music. Such positioning is central to the collection’s first section as the speaker encourages this receptivity at various points, urging one to ‘press your ear to the white door’, ‘speak into my good ear’, or ‘hear the ghost choir’.

He encourages this because of music’s power, which is visible in the titular poem, ‘As if to Sing’. It describes how four ‘Welsh boys’

… for safe-keeping,
they packed their hearts
into a song.

By embracing song, when tragedy strikes and ‘only one in four parts / of their harmony / returned’, the ‘song still held them all’. Again, the song transcends its original context and, in this case, replicates this context within its own temporality. A song preserves outside of time. ‘Still’ points to both to the moment’s permanence and its eternal stasis, forever evoking when their comradery flourished in the ‘sun’.

‘If’ in the poem and collection’s title, then, refers to the listener’s ability to hear this latent music. After recognizing resonant songs in grief and war, the second and strongest section tunes into the poet’s memories of his three sons.

‘The Tree out the Back’ portrays three ‘boys’ mischievously climbing a tree. There is more careful positioning in the poem’s verticality. Looking up, ‘you can’t tell legs / from branches’. This distills the experience of a parent watching their children grow into a simple image; an obscured image that is powerfully and rhythmically utilised to show how time can suddenly pass:

And now the grizzly boughs bend
Under the weight of three men.

These boys-turned-men ‘carve their names on the late sun’, they leave their signature in the memory’s light. Despite the emotional resonance of such scenes, the collection’s stanzas are neat and move with measured syntax. They describe such tender images as a baby breathing with mouth ‘barely open, barely closed’, a haircut that ‘this year his mother’s on tip toes’ for, and how ‘boys sailing twigs’ in a birdbath’s ‘brightness’. Henry’s strength is in his poetry’s intimacy. Moments are minimally yet evocatively portrayed to access what Seamus Heaney calls ‘the music of what happens’.

This section’s concluding poem, ‘The Boys in the Branches’, returns to the tree climbers:

I think I see their shadows
If I shield my eyes.

Don’t cry.
They simply ran on ahead.

Emotive moments in the collection are marked by fragmented stanzas. Despite clearly aligning, distance is highlighted in these breaks. What is implicit in this distance between stanzas, between father and his sons, is silence. Silence represents this section’s music. Like in ‘Birthday Cut’, it is a ‘silence that is understood’, in that the resonance of a moment is so loud and clear that none can escape it. The necessity for song is to celebrate and preserve these powerful but transient moments. Like how the ‘Welsh boy’ of ‘As if to Sing’ must sing to be with his three missing soldier friends, the poet must sing for the three boys that his sons no longer are.

The final section returns to the watery imagery of the first, centred around the long poem, ‘The Key to Penllain’. It depicts the speaker’s dreamy search through sand for a key. The poem passes through surreal sightings of Brown Helen, featured in Henry’s previous collections, ‘Hermes strumming some Dylan, / the midwife Elethea Gwyn’, and more until ‘the key pulls them in / heads first … into the void’. Like Bob Dylan’s ‘Desolation Row’, the poem tracks a surreal journey peppered with vignettes that ultimately points towards entropy.

All ‘except Penllain’ follow ‘into the O’. Penllain, described as ‘a terraced house in Cei Newydd’, is portrayed in the following poem as a ship at sea. It is the keynote of the collection, a house of memories serving as a solid foundation for the poet caught in the tides of time.

Despite being the weakest section, because these dreamy and surreal scenes lack intimacy, it complements the overall musicality of the text. By anchoring these poems in Pennlain, the house works like a musical key, a harmonic foundation for all the notes to emerge from.

Of course, his Pennlain is personal, hence why the long poem repeatedly remarks on the speaker’s ‘aloneness’ and the latter poem on how the ship is ‘crewless’. It is his receptivity that saves him, as Tim Buckley’s Song to the Siren enters the speaker’s dreams to remind him that ‘she was here’.

The final poem, ‘Cân Hwyr’, replies by singing back in Welsh. Despite the distance between them and the change of language, the songs sound over the waters. Paul Henry’s collection As If To Sing shows the poet learning to listen for the music latent in life, finding it in his own memories, and harnessing it to connect with another. Expression completes this movement, songs must be released and received if they are to connect and hold us.

And keep this song, its light.

In a collection that celebrates intimacy, Henry shows how there is music even in silence and that hearing it can help us meet in the timeless space that is song.