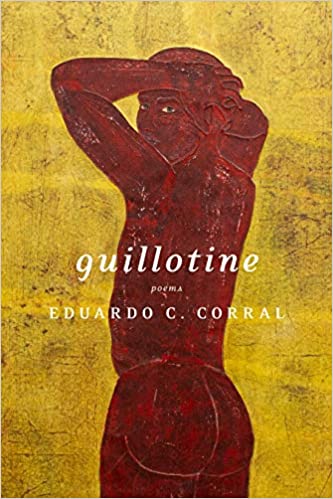 There is a sharp, tangy sense about Eduardo C. Corral’s poems.  Sometimes that tang is almost literal; these poems are never shy about talking about the senses at their most acute.  But that tangy quality is part of the Corral’s style, too.  The poems are often organised in a stepped verse which cascades down the page.  And the short lines are mirrored in short syntactical units.  The cumulative effect is one of writing which is driven and punchy, stopping short of aggression but never less than forceful.

That tang is present from the first page, in the poem ‘Ceremonial’, which begins,

Delirious,
touch-starved,
I pinch a mole
on my skin, pull it
off, like a bead –
I pinch & pull until
I am holding
a black rosary.

Further down the page, Corral describes a moment of touch,

I can still feel
his thumb –
warm,
burled – moving
in my mouth.
His thumbnail
a flake

of sugar
he would not
allow me to swallow.

Corral has commented that it was three years before he felt he could allow this poem to ‘go public’. And it is certainly raw.  It’s ending is also very exposing, even as it describes putting on a particular type of clothing.  The raw quality is not only in the use of the first person, what Corral calls the ‘lyric persona’ who narrates the poem.  That nakedness is also held in the present tense which offers the reader the sense that all the action describe is utterly factual and certain.  There is an inescapable quality to both the writing and the experiences it encodes.

Corral has also commented that he was trying to encapsulate unrequited love.  One of the ways in which he does that is to use animals as images of the way that love appears to the unfulfilled lover. In the title poem, Corral uses the image of scorpions who ‘always arrive / at dawn.  Gently, / their pincers / touch the cuts / on my lips… The scorpions – dark green, dank – / reach in, pull out / the razor blade / under my tongue.’  As we have seen, Corral is a very much a poet of detail.  The experiences the ‘lyric persona’ undergoes are piercingly described.  And the stepped verse controls the reader’s reading speed so that each detail is piercingly felt, too.  Note, too, that additional detail of the cuts to the lips.  We might not know where those cuts come from, but Corral draws our attention to them, nonetheless.  And our attention is forced to speculate on where their origin;  an origin that might well not have been pleasant.  Thus, the very title of the poem, and its contents and structure suggest a world in which relationships contain both emotional and actual violence.  As Corral puts it towards the end of the poem, ‘A threat, a reminder. / It’s my task to stop yearning / for as long / as it takes them / to carry a blade / across my skin.’ That guillotine falls not only on the relationship, but also on the desire that generates the relationship in the first place.

The end of the book contains two poems which detail the experiences of illegal immigrants smuggled into the United States into drop houses.  The first of these, ‘1707 San Joaquin Avenue’ contains harrowing detail of the conditions of these drop houses.  Its third part is a poem in the voice of one of the people traffickers.  Given Corral’s skill at describing physical sensations in the other poems, it is no wonder that this poem is a very frightening account of the behaviour of the trafficker. The final part of the poem juxtaposes the names of, we can assume, the trafficked immigrants, in large typefaces across one whole page.

The final poem ‘To Juan Doe #234’ is, again, a poem of juxtapositions. This time the juxtaposition of the finding of body in the desert, with the funeral meal after the funeral, and then with the relationship between the narrator and what we assume is the narrator’s brother.  These juxtapositions are themselves broken down into smaller, contrasted images.  Central to those contrasts is, again, the notion of flesh.  Here, that flesh is the flesh that both falls off the body of the dead man and also the meat that is cooked slowly for the funeral meal.  That shocking contrast is emphasized by Corral, ‘when I read his flesh fell // off the bones, my stomach rumbled, / my mouth // watered.’ What I take Corral to be suggesting is the complicity of the body and the voyeur who observes;  that we cannot take our eyes away, no matter how devastating the loss.  Corral is supremely adept at ‘rubbing our eyes in it.’  But this book is never gratuitous, no matter how direct or how difficult the subject matter.  This is not a book with many laughs.  Its power, however, is undeniable.  As a kind of primer on certain kinds of experience, these poems are almost unequaled.