Carolyn Forché | In the Lateness of the World | Bloodaxe Books: £10.99 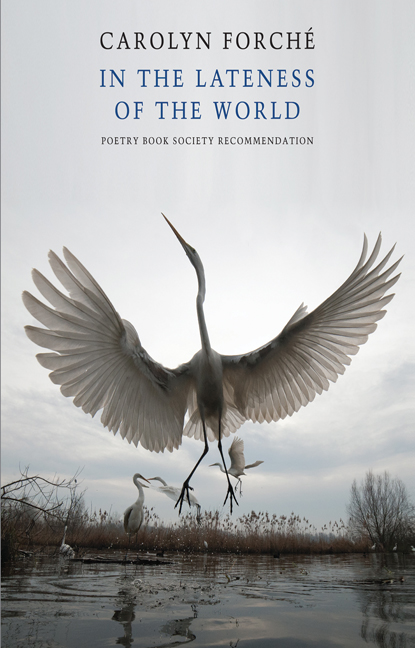 The blurb to Carolyn Forché’s first full collection for seventeen years suggests that the poems are ‘meditative’. That’s one way to describe them but it might not be the best.  The fact that many of these poems are narratives either in the first person or in a clearly assumed persona, might suggest that ‘meditation’ is not quite what they are.  Those first persons allied with Forché’s conspicuous use of simple tenses, present and past, makes these poems much more story oriented and driven than meditative.

And the stories are driven because of their sense of witness.  Forché has edited two anthologies of poetry of witness and so she knows what she is doing.  In 2018, Forché reprinted her 1981 collection, The Country Between Us, a collection in which she wrote powerfully and movingly of her experiences in Latin America at a time when that area was controlled by powerful right-wing forces, for whom killings and disappearances were the daily modus operandi.  In the Lateness of the World is, in some ways, a continuance of that first book, in that many of the poems are, undoubtedly, ‘poems of witness’.  The poems range from those wars in Latin America, through to the continuing effects of the Vietnam war, to poems set in Greece, the Russia of Ilya Kaminsky, and the Austria of Trakl.  Each of these places has a story and that story has resonances of the past, and these resonances witness sometimes to vivid horrors, but more often to repression, where human lives are constrained and curtailed. If there is a meditative tone here, it is that the drive has that elegiac quality. Forché’s great skill is to witness without drifting into hyperbolic elegy; to distance herself, instead, from the events she is witnessing  And that distance is never an absolute distance of removal, but it is, certainly, an artistic distance.  Forché’s great need is to be able to write about the things she sees without becoming so involved and overcome that she is not able to witness with all the skill she possesses.

In part, that skill is to use long sentences that carry events and description and Forché’s reactions to those events.  ‘Letter from a City under Siege’ begins with this;

Turning the pages of the book you have lent me of your wounded city,
reading the braille on its walls, walking beneath ghost chestnuts
past fires that turn the bullet-shattered windows bronze,
flaring an instant without warming the fallen houses
where you sleep without water or light, a biscuit tin between you,
or later in the café ruins, you discuss all night the burnt literature
borrowed from a library where all the books met with despair.

Here the participles, ‘Turning’, ‘reading’, ‘walking’, ‘flaring’, ‘warming’ create a suspended, continuous feeling into which the ‘you’ emerges with a factual urgency.  Thus, Forché places the continuities of the ‘I’ narrator against the facts of the ‘you’ protagonist.  The witness of the narrator is moving through the experience, whereas the ‘you’ is situated within it.  Forché’s other great skill is to choose the adjectives carefully: wounded, fallen, bullet-shattered (more participles) and then the compound nouns ‘ghost chestnuts’, ‘biscuit tin’, ‘café ruins’ so that a particular solidity is created around the context of nouns, ‘city’, ‘braille’, etc. All these participants are couched within a sinuous, fluent syntax that builds up to the final word ‘despair’.  And the fluency means that this final, noun is earned; it is emphatic but not melodramatic.

What that grammar all adds up to is establish that this is indeed a letter from that city under siege.  The letter is the witness, made construction is that, made and constructed, but that even so, it is that construction which communicates the lives of those who live in the city.  Some years ago, I heard testimonies from women who had lived through the siege of Sarajevo.  One of these talked about swapping some cigarettes for a beautiful art book.  That book and those pictures gave witness in their own way to the human culture transcending the moment.  Although the books in Forché’s poem are burnt and the library despairing, the poem points to a way beyond that.

The poem ends;
The library burns on page sixty, as it burns in all the newspapers of the world,
and the clopping of horses’ hooves isn’t the sound of clopping hooves.
From here a dog finds his way through snow with a human bone.
And what else, what more? Even the clocks have run out of time.
But, my good friend, the tunnel! There is still a tunnel for oranges.

Of course, the tunnel with its oranges might only be available if you have the money or the right connections, preferably both.  Human ingenuity finds a way to exploit even in the darkest hours.  But even the irony offers a kind of hope, there might not be light at the end of the tunnel, but perhaps there are oranges.  And again, here, Forché’s skill is position that image of the oranges after these other larger, more rhetorical images of the siege reported in the world’s newspapers, the way the senses suggest one thing whereas the truth is different, the innocent, Audenesque dog is, itself, party to the horror.  The clocks have, with another Auden-like image, stopped.  However, there might, just might, be oranges;  something solid and possible.

The ‘I/you’ relationship runs through a number of these poems.  Some of the poems are elegies to a dead ‘you’.  In ‘Elegy for an Unknown Poet’, the dead writer returns to re-witness the world of the living.  Here, the living appear both unreal and ‘oblivious of what they are’.  The dead poet asks, frustratedly, ‘what can be done?’ The living are caught in a stasis of their own making.  And this stasis extends to the ‘I’ narrating, ‘What is left us then but darkness?  Oneself is always dark and near.’ Perhaps the ‘oneself’ of the dead writing is also included in that, too.

In the current world of, often but not always, brute, political masculinity, Forché’s witness is to that darker, nearer sense of selfhood;  dark because it is complicated, problematic, deeper, and near because it is inescapable, an Eliotesque shadow that always walks beside us.  These often very beautiful poems witness in a way which makes the reader part of that near, dark self, as Forché puts it in the very last line of the book, ‘open then to the coming of what comes’.