Amy Woolard | Neck of the Woods | reviewed by Ian Pople 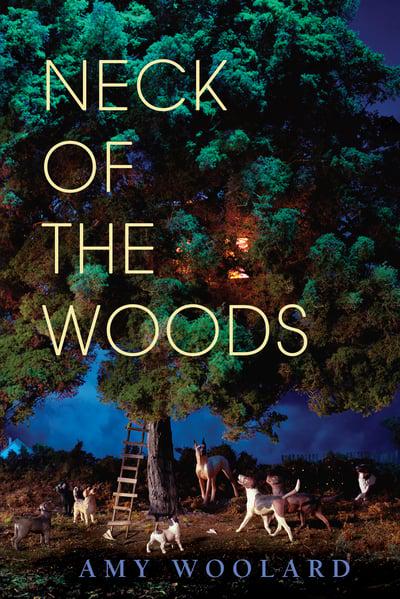 There’s a perky, feisty quality to the writing in Amy Woolard’s debut collection, Neck of the Woods.  A glance at a few of the titles of the poems will give some of the overall flavour of the collection: ‘All Get Out’, ‘Girl Gets Sick of a Rose’, ‘On The Most Terrifying Character in The Wizard of Oz’, ‘Ain’t No Party’, and ‘What I told the Cops’.  Of course, it’s very easy to pick out certain titles, but the titles do tend to reflect the writing style, which is often punchy and driven.

This, perhaps, the poetry of the Netflix generation.  The imagery in the poems is heightened sometimes lurid, and that makes the poems very vivid and striking. In ‘All Get Out’, for example, begins, ‘I’ve been sweeping each room soundly, served up / Scraps to the hounds, & sewn lead sinkers  into my best / Clothes & and the drapes.  In every closet, an identical violin. / Days go by like the past owners of a house // circling the neighbourhood – there is no garden, / No elaborate stone wall, no glass door corsage / With light, your last-letter.’  Woolard uses that heightened, televisual, David Lynch type atmosphere to considerable effect.

The personas who narrate most of the poems live on the edge of things, and the worlds they are on the edge of also feel precipitous.  In ‘An Engine that Won’t’, ‘The town, my dear, is closing down; dead- / Bolts slipping into their sleeves, cicadas insisting // Like so many typewriters, drunk girls sleeping // In their shoes.’  There’s a great physicality about Woolard’s imagery.  The images and the narratives are palpable and feel lived in.  And those narratives mesh both woozily, in keeping with the people who populate them and who narrate them, but also consistently.  Like David Lynch, Woolard creates coherent worlds even as, at the same time, they are surreal and lurid.

In ‘An Engine that Won’t’, the narrator breaks the fourth wall,

Since April I’ve had one foot
In someone else’s grave, a drunk girl who left me

Her shoes.  The way she would move through a party
Like cursive, a car passing through the underlit dark, gleaming

Like the eye of a cooked fish.  What she didn’t leave was a note.
What I mean is: what a cliffhanger.  But wait, this is no time

To excuse yourself, dear;  this is no time for a smoke,

As we can see here, Woolard’s breaking of the fourth wall works with her easy ability with narrative. That interpolation, ‘What I mean is: what a cliffhanger,’ is part of the swift movement through the ‘storyline’ of the poem, from the drunk girl at the party, to the atmosphere created by the car passing through the underlit dark.  Even that ‘underlit’ suggests the cinematic quality of much of Woolard’s writing.  And, at the end of the excerpt here, the turning of the narrative on its head almost, with the narrator reflecting on her own participation in the that story.

Woolard is a highly imaginative writer.  As I have suggested that imagination is both highly cinematic and also linguistically aware.  Although Woolard could not be called a L=A=N=G=U=A=G=E poet, the surrealism of her imagination and the flow of her imagery is sometimes disruptive in a way that L=A=N=G=U=A=G=E poetry seeks to be. In ‘Mise en Place’, a variation on the cinematic term ‘mise en scene’, the images run pell-mell, one after another,

The peonies are popping! A fist that is also a kettle that is also
A pact petals made with whatever cabal of bees decides to stick

Around.  Let’s all shake on it.  Ah these lungs of mine the perfect
Emergency orange of extension cord oil.

Here, the language is held, almost clenched in the imagery – the fist here is almost metonymic of the procedure – but around that clenched fist, a set of images buzzes much like the bees themselves.  The fact that the bees are a ‘cabal’ is also part of the tension that Woolard builds here.  And that imperative ‘Let’s all shake on it,’ feels forced and threatening, as if it made an ‘offer you couldn’t refuse.’ Then the final image of the lungs seemingly filled with a kind of oil makes interiorizes that threat;  the lungs themselves an ‘emergency orange.’  Woolard is pulling two lines of imagery together:  the first is the imagery of the flowers, ‘peonies’, ‘petals’ and that final ‘orange’ that blends with the other flower images;  the second line of imagery is the body imagery, ‘fist’, the implicit ‘hand’ in ‘let’s shake on it’, and the final ‘lungs.’ The two lines pulled together in the last sentence I’ve quoted.

As I’ve suggested, this is poetry for the Netflix generation and is none the worse for that.  Woolard has considerable control in these poems which have a greater surface variety than I have been able to write about here.  The visual elements in the poems make them leap off the page even when they pull you into the sometimes sleazy, dissolute worlds of their narrators and characters.  Woolard is a very accomplished poet and it will be interesting to see where she goes next.