Sarah Feldman | The Half-Life of Oracles | reviewed by Ian Pople 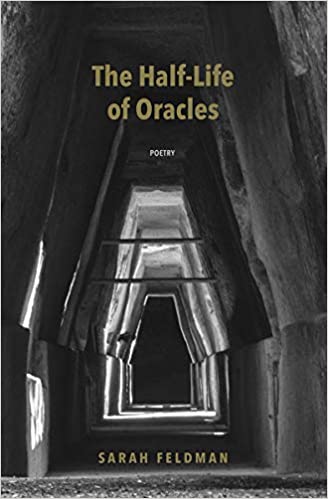 The writer who takes on the oracular and the vatic is offering themselves up as a hostage to fortune.  The subject matter may well take in the various versions of myth that are parts of certain types of education but not part of the education of many.  And the style that couches such a ‘myth kitty’, to use Larkin’s term, can often likely to be as high flown as the subject matter.  A commitment to the myth is often a commitment to the language in which it develops.  Sarah Feldman’s debut book does not always successfully surmount these issues.  But what the poems in The Half-Life of Oracles do achieve is a real sense that Feldman is a poet to whom we should pay attention.  This is, in part, because The Half-Life of Oracles has a sense of throat clearing, as though Feldman’s education – and it is clear that she is well-versed in classical, particularly Greek, thought – has been the subject matter for many of these poems.  And yet, when the poems move beyond the search for meanings in that classical world, there is a poetry that actually feels fully grounded in observation and human empathies.  It also needs to be said, that Feldman’s use of that myth-kitty, not unlike many who write about the mythological, finds adroit ways of accessing ‘human’ meanings.

‘Letters for the River’ is broken into five sections, each named after a river in Greek mythology: Styx, Phlegethon, Cocytus, Acheron and Lethe. Near the beginning of that piece is the following:

Homer’s gods, you know, conversant in mortal
and immortal meanings alike, knew two names
for ever object and two meanings
for every name – both equally true, but the one
perhaps more equal than the other,
The failure is common.  Hands come apart,
bodies come apart, the blood flows together
and flows apart, the separate senses are found
and lost in turn.

There is a largeness and expansion to the sentiments Feldman expresses here;  and the longer, flowing sentences are characteristic of her style throughout the book.  The use of the present tense, too, places the utterances in a particular kind of certainty.  All of which demands an acceptance from the reader.  However, inside all of this, the reader can see the human perspectives.  We can, perhaps, all see the sense in which language is perspectival, and that we, as humans, think of ourselves, like Homer’s gods, as both within and above the fray.  Part of the result of those competing perspectives is that failure occurs in the gaps and slippages between those perspectives.

Elsewhere, actually, Feldman depicts a vivid sense of the everyday, and of lives lived coping with what mundanity brings.  Here, her natural empathy for her protagonists shines through.  ‘Zeroes and Ones’ is a sequence of seven sections spread over seven pages. The second of these begins,

Bad, sure, these slow rooms, but worse the feeling we would soon, with no better reason,
leave them;  worse the repeating through that we might choose again –
not better, maybe, but differently, or if not differently, at least
more gently, singing the old, choked songs
a little longer, because we are leaving each other,
slowly but surely, and the heart must be packed and emptied,
and packed again,’

Actually, piece goes on for another seven lines in the same sentence.  There is a nice accuracy about this.  Firstly, the use of the first person feels authentic.  We can imagine this as the experience of many as they leave relationships, families, student accommodation, for a final time.  There is a nice sense of this as an account of ending, which feels certain at the time but always contains the feeling that this could happen again.  The ‘others’ might change but the self at the centre moves from one place to another, both mutable and the same.  Feldman’s ability with the long sentence works well here as it mimics that sticky sense of situations never really finished or completely left behind.  And the section finishes with a nice metaphor that holds all that tacky emotion, ‘as the dusk laying still the hulls that scrape / all night against the harbour.’

Towards the end of this quite substantial collection are a number of strong, short poems.  ‘Bedtime Story’ is a deft narrative of two girls first seen playing ‘into the deepening /dark’.  Feldman captures that sense of children playing in the liminal sunset, who, ‘saw themselves / off on their own, with houses and hedges / and lawns on which their children, in turn, /displaced their parents in play.’  Inside this is a physical attenuation, ‘their shadows growing long and leaning / and going out.’  For all the girls belief in their own futures and capabilities, the poem ends with a return to childhood,

Feldman’s ability to feel into changing and uncertain lives gives this debut collection a real emotional heft.  There is the inevitable variety of a first book, but there is more than enough here to see Sarah Feldman as already accomplished, technically assured and possessed of a potentially arresting voice.