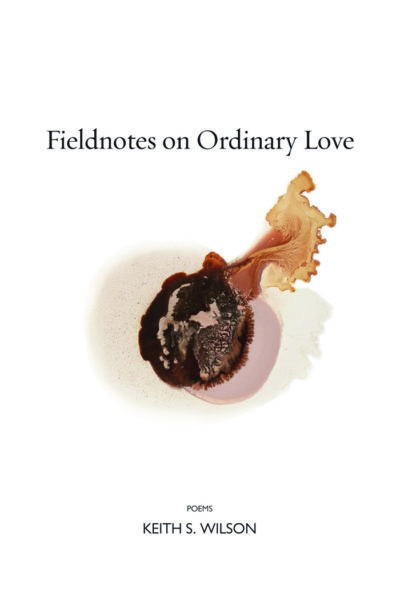 The back-cover blurb for this, Keith S. Wilson’s first collection, notes, ‘these are poems that speak in layers, bridging the interstitial spaces between the personal and societal longing.’ This sense of layers suggests that there is a horizontal ‘flow’ to Wilson’s poems. There is also a sense that the poems offer a kind of sandwich, or layer cake, approach to moving between the ‘things’ and ‘event’s reported on the poems’ surfaces and the deeper ‘spaces’ which exist between the personal and the social. And this is true, up to a point. That sense of the poem as a topography, however, doesn’t really respond to the varied ways in which Wilson organises his poems. That there are a variety of forms and forms of address is, perhaps, typical of a first book in which the writer is trying out both modes and voices.

In ‘Driftwood’ for example, the short lines running down the page and a bit of the poem contain a number of ideas and images that move quickly and with a sense that the consciousness of the poem mimics the experiencing of the lake and its own surface,

The driftwood’s brown
eyes are blue
as the white lap of the lake
and the face and hands
are ellipses, sober
and round. What time is it –
the sun’s still stuck
spinning the sky all purple and white
(I have, you know, a waiting
wife), but wow, how the wind swings
him good – boy, fetch
us the keys – and the fishing here’s good too,
whether from a shore
or a reel.

In addition to the imagery, the manners of address also move through in rapid succession. In the first sentence we have personification of the driftwood; that it’s shape ‘represents’ a face and hands, within the white lap of the lake. The shaping of the driftwood by the forces of the water are part of its being in the ‘lap’ of the lake. I.A Richard’s famous division of metaphor into tenor, in this case the driftwood, and vehicle, in this case the ‘brown eyes’ brings the reader, here, both immediacy and recession, suspended in that gap between tenor and vehicle. So, because ‘brown eyes’ is used so early in the poem, the reader is involved in an act of acceptance, a buying into the writer’s metaphorical schema. The surprise of the metaphor may simply push the reader away as much as it provides immediacy and imagery. Wilson has the courage of his convictions, however, by attributing face and hands to the wood, even as he moves from the metaphor to the ellipses, and then back into the metaphor with the personification in, ‘sober’.

The address of the poem then moves into a much more colloquial, spoken register; little could be more colloquial than a question such as ‘What time is it’, even where it is not followed by a question mark. Then there is a swing back into metaphor with the sun ‘spinning’ the sky. Slightly similar to that first use of metaphor, Wilson moves back into direct naming of the colours of the sky. After the metaphor, the poem moves back into speech. As with ‘What time is it’, the ‘you know’ here, invites the reader into a direct relationship with the speaker; compounded by the intimacy of revelation about the waiting wife.

Such rapid moving between techniques is not present in all the poems in the book. ‘The Floor Scrapers’ is a response to Caillebotte’s painting ‘Les raboteurs de parquet’, from 1875, currently at the ‎Musée d’Orsay‎. The picture is famous for its luminous portrayal of three men stripped to their waists scraping a wooden floor. Wilson’s poem inhabits the painting and records in striking detail the visceral reaction to the motif from the poem’s narrator. There is a way in which the ‘I’ here does not seem to be Wilson, the authorising consciousness of the poem. Or, if the ‘I’ is the writer, then the writer strips himself almost as bare as the men in the painting. Whichever way it is, the ‘I’ of the poem seeks to record the portrayal of the men, ‘(fingers lolling over each other like men / on a rocking train) and i see the light and labor both / and the ordinary somersaults of the rib cage / and viscera (they say the heart)’.

The easy sensuality of ‘Driftwood’ is here placed in the service of Wilson’s depiction of the men working. And it is that sense of the physical involvement of the work that both the painting and Wilson’s version of it evoke. Wilson begins the poem by cleverly referring to the hands through which all work of this period would have occurred.

whatever they say of the heart, the truth is this:
we embody our hands. every morning I have my look at them.
my hands cupping my face, a bowl of water.

Thus, Wilson demands that the reader recognise where the physical begins; that interesting phrase, ‘we embody our hands’. Here, the embodiment works both ways: on the one hand, we and our bodies are a product of our hands and what we do with them, on the other, we offer embodiment to our hands making them the means through which we and our bodies exist. There is then a faint echo of Auden’s ‘As I walked out one evening’; ‘’O plunge your hands in water, Plunge them in up to the wrist; Stare, stare in the basin. And wonder what you’ve missed.’ Wilson again offers a slightly unusual phrase, ‘I have my look at them.’ And then the way in which the hands cup the face like a bowl of water. The face is embodied by the hands, which stimulate and cleanse in the way that a bowl of water does.

Wilson widens the poem out into a profound mediation on the ways in which the body is reified,

as when a man offers his [grasp]

in extension and becomes, before me,
a basilica, and i watch the gleam of the fish-throated
muscles of the back, the narrow bones
and knees and, i say again, the knuckles,
each a chamber for a whole religion
performed by the hands

The mentions of ‘basilica’ and ‘religion’ nod towards the kinds of spirituality that is part of the current of the poetry. In part, a personal God has a presence in the poems even where it is clearly an absconded God. With the absconding comes a sense of life offering its own kinds of transcendence. Here, transcendence for the observer is the body and an absorption in it. Wilson recognises, perhaps, that, as Robert Lowell put it, ‘my eyes have seen what my hand did’. In Lowell’s case, it was an implicit recognition that his writing could inflict wounds. In Wilson’s case, it is the recognition in the writing of the way in which the hands can consecrate the body.

That consecration of the body is present in nearly all the poems in this fine debut collection. Wilson has found a way into poems and poetry which clearly works for him. It will be very interesting to see where that method takes him next.