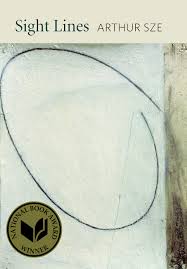 I had not encountered Arthur Sze’s poetry before and his approach is one of the most interesting and surprising that I’ve come across in a long time. It is almost as if Sze is a L=A=N=G=U=A=G=E poet with images. The images roll out and around in Sze’s poems in the way that the surface is disrupted in L=A=N=G=U=A=G=E poetry. And there are disjunctions between the imagery which has the ‘feel’ of L=A=N=G=U=A=G=E disruption. The blurb on the back of Sight Lines calls this, ‘formal disruption, legible erasure, and a diversity of voices.’ At the same time, the poems often start and finish inside similar image frames.

‘Under a Rising Moon’, for example, begins ‘Driving at night between Chinle and Tsaile, / I fixate on deer along the road: in the headlights’. In the middle of the poem, there is a return to that world with ‘Though warned of elk, / I heed the car with a single headlight enlarging / in my rearview mirror.’ The poem finishes with ‘tonight / tracks of moonlight run ahead of where I can be.’ Between the episodes of that particular narrative, we get an unglazed pot, a ‘man who flies by helicopter’, and, ‘Diné women tied their infants / on cradleboards, stashed them in crevices / but never came back.’ Of course, by cutting away the context, I’ve made the images seem more separate, perhaps, than they might appear to others. One of the ways in which Sze seems to give context to these images is because of the warmth of voice and style that Sze has.

Another technical resource that Sze has is his facility with precise description. The poem, ‘The Radiant’s’ whose title contains that interesting elision, carries onto the first line with ‘the origin point of a meteor shower.’ Next, Sze describes, ‘Peaches redden: branches / are propped with juniper posts // and a shovel; ‘ The poem ends with ‘We do not lie // in a meadow to view the Perseids / but discover, behind a motel, / a vineyard, and gather as we go.’ Verbs are clearly very important to Sze; the ‘redden’, ‘propped’, ‘lie’, ‘view’, ‘discover’, ‘gather’ and ‘go’ give the writing a momentum which carries it down the stepped lines. This momentum is carried to that last ‘go’ which pushes out beyond the end of the poem. Then there are the physical details that link the verbs, the juniper posts and shovels which prop the branches. And that inner sense of the decision not to lie down to watch the Perseids as they pass overhead. The combined accumulations are neatly delineated.

Sze’s approach, then, is palpably physical. If the movement through the trajectory of a poem responds to Sze’s response to ‘things being various’; the dance of the observing mind through the things it encounters and processes. Then the things themselves are palpable, closely observed, and brought in through the surface of the poem. Sze is clearly an amazing botanist with a daunting knowledge of plants and their names, in a generation of American poets who all seem au fait with the plants they live among. There is with this empiricism a willingness to explore what might be beyond In ‘Unpacking a Globe’, Sze describes a coyote trotting across in front of the headlights of his car. His response to that is ‘…that’s how / I want to live on this planet: / alive to a rabbit at a glass door – / and flower where there is no flower.’ This is, perhaps, an appeal to his own imagination. And yet, these ‘imaginings’ are prefaced by the encounter with the coyote; one of those ‘typical’ encounters between man and animal, the human ‘safe’ inside their car, and the coyote ‘safe’ and insouciant outside the car. It is that interface between the real world and the imagined world that Sze charts so successfully.

There is, of course, an environmental aspect to all this. And Sze is never afraid of plain statement. In ‘Doppler Effect’, for example, ‘radioactive water trickles underground / toward the Pacific Ocean; nickel and copper / particulates contaminate the Brocade River. / Will this planet sustain ten billion people?’ The plain statement is earned, perhaps, by the physicality and precision found in the rest of the writing. That detailed precision, ironically, provides the grounding for the plain statement where, normally, the facts would need examples to support them.

There are humans in this collection. Sometimes, they arrive a little glancingly and their activities illustrate human sensitivity, and insensitivity, towards the natural world: ‘an accountant / yearns to stroll in a meadow’; ‘medical researchers extract saliva / from Gila monsters, draw blue blood / from horseshoe crabs’. Elsewhere, humans are simply humans; ‘a lawyer / dates his boss but one day he handcuffs and assaults her, / breaks two bones in her face as she begs for her life – ‘.

This is an intense, occasionally unremitting book. As he himself comments, ‘A poem can never be too dark’ [his italics]. And the poems are placed in small subsections divided by pages with epigraphs from I’m assuming, Sze himself. A couple of these will illustrate: ‘- During the Cultural Revolution, a boy saw his mother shot dead by a firing squad –‘ and ‘- A woman detonates when a spam text triggers bombs strapped to her body –‘ I wonder whether Sze doesn’t do himself a slight disservice with such epigraphs. Sze’s mind flickers over the natural world how humans inhabit and control the Anthropocene. The effect is to put the things he sees into sharp contrast and relief. Sze shows us with considerable efficacy and delicacy just how out of kilter that world is without, perhaps, the graphic detail of these epigraphs.