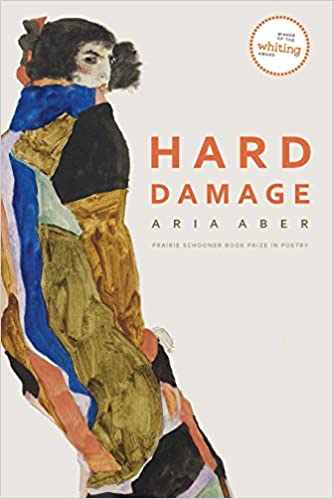 Not so long ago, I reviewed Patricia Smith’s Incendiary Art on this page. The title of Aria Aber’s first volume, Hard Damage, points in a similar rhetorical direction. The title is a gesture, a performative, which throws down a gauntlet to the reader. It is a title which has a somewhat ‘take-me-or-leave-me’ quality. If you came across it on a bookshop shelf, would it attract you or put you off? That feeling might also be compounded by the cover, which is a reproduction of Egon Schiele’s 1911 painting ‘Moa’, from the Leopold Museum in Vienna. The painting depicts the dancer Moa, and the museum’s own website describes the dancer’s gaze from the canvas as, ‘Out of the corner of her eye, this pale-faced figure’s over-the-shoulder gaze – disparaging, devious, dramatic – meets the viewer’s.’ The eyes are reduced to slits in which the coal black pupil is emphasised by a tiny gash of white sclera. The figure of the dancer is formlessness, a dramatic wash of black, dark blue and a kind of excretory brown, that drapes down the canvas so that the dancer’s gaze becomes the focus of the viewer’s own. Nothing if not confrontational then!

Aber, herself, was brought up in Germany by Afghan refugee parents. It’s little surprise then that questions of identity, and, in particular, finding a voice dominate these fiery, dramatic poems. As Sally Wen Mao comments in a back cover blurb, these poems are ‘searing’. However, one of the first important things about this book is how carefully assembled, and orchestrated this book is. There is a prologue, which we’ll return to, and then five tightly organised sections. One of which is called ‘Rilke and I’, and another which concentrates on the CIA’s Operation Cyclone, in which the Americans funded mujahedeen operations in Afghanistan. This section, in turn, is prefaced by a chronology of ‘Covert United States Involvement in Regime Change’. This list starts in 1949 with US involvement in a Syrian coup d’état, and finishes with Operation Cyclone in Afghanistan, 1979-89. So there are a number of constraints which act like Frost’s tennis net, around these poems.

That first poem, ‘Reading Rilke in Berlin’, is not so much about actually reading Rilke in Berlin as it is about the trials and tribulations of learning English in, we have to suppose in the US. The title perhaps suggests that reading Rilke in Berlin is much easier for Aber than learning English in the US. As Aber starts, ‘Into English I splintered the way my father clutched / his valise at the airport, defeated and un-American.’ The first sentence is,itself, splintered around the word ‘splintered’. Is ‘the way’ the object of the verb ‘splintered’, i.e. ‘I splintered the way’ where ‘the way’ is a route or direction, which the narrator splinters, and, perhaps, splinters into English. Or does it mean that the narrator ‘splinters into English’ in the same manner as her father clutches his valise at the airport, where he is ‘defeated and un-American’; meaning, I’m assuming, that her father’s defeat and being ‘un-American’ is similar to the way she works in English. With these ambiguities, we also have the emphasis falling on the final world in the sentence, ‘un-American’ with its obvious resonance with the McCarthy-ite, House Un-American Activities Committee.

Frank Muir used to joke about how possible it would be to explain to a foreign learner of English, the sentence, ‘My wife has a little woman that runs up curtains for her.’ And the complexities of the seemingly innocuous English prepositional system prove a touchstone for the complexities of life in an English-speaking country, ‘So, I lay at a pavement. Under your Elegy. In a bridge. / Such starkness the want to put inside me a perfect sentence. / What would Lou Salome have done?’ Lou Salome, was Rilke’s lover and is, perhaps because of that fact, seemingly, an invisible mentor to Aber in her attempts to learn English. This is a language that acts as both an invisible and visible barrier. When her mother stumbles over a question at customs, the narrator comments, ‘Oh, I shoved my hand right through / the officer’s mouth and ripped out his tongue, / then under my pillow I placed it, and waited / for it to bloom new my blood.’ That tongue in both meanings is both the locked door and the key to unlocking it; a key that can bloom anew for the narrator. This poem vividly rehearses finding a voice and the impediments to that for both Aber and her parents. So, it is no surprise that is placed first in the book and detached from the five sections that follow it.

‘Reading Rilke in Berlin’ also illustrates another aspect of Aber’s technical achievement; the way in which poems are organised and orchestrated. This is an extraordinarily sure-footed collection. And that sure-footedness makes it very difficult to quote from individual poems with out wresting a line or a sentence from its beautifully constructed context.

Hard Damage goes on to painstakingly explore the way the search for identity in new countries and languages affects the whole of a family unit. In this the book is similar to Ocean Vuong’s first book, Night Sky with Exit Wounds. That book also explored the theme of sexual identity in the newly immigrant. However, for all its incandescent imagination, Night Sky with Exit Wounds lacked very slightly Aber’s often forensic examination of how the immigrant experience almost metastasizes throughout the intellectual, emotional and spiritual dimensions of immigrant’s lives. Thus, in the third section of the book, ‘Rilke and I’, Aber dissects individual words in German that Aber associates with a lexicon that is Rilke’s, such as ‘ich/I’ or ‘Geschehn/Happen’. In ‘Alles/All’, Aber picks up on a line from Rilke’s First Duino Elegy, ‘Every angel is terrible’

I wanted it all. I wanted the terrible angels of my home. When you, / Mother, were still the only you I had, you’d say: German is so beautiful, look how green it is! // From the back, in my car seat, I’d protest: No, AFGHANISTAN IS MORE BEAUTIFUL. IT HAS EVERYTHING. // You’d laugh, somewhat confounded: You have never been there. // There: green macaws, A K 47s, faeces in water pipes, schools in clay huts, tiny crocheted shoes, market men sitting on upside down crates, landmines, mud, an abundance of apples, pomegranates, watermelons, flies, mosquitoes, that little house behind the river – does it still exist?’

That sense of wanting it all, of wanting ‘the terrible angels of my home’, not only shows the way in which immigration is pervaded by not only wanting, wanting what is there now, and wanting to hold onto the past even where that past is imagined or lost. But wanting the ‘terrible angels of my home’ also suggests that even the pain of the past is almost desired part of an experience which must not be lost. There is also the sense that Rilke can offer Aber a means of articulating such complex depths of emotion. This is not quite the same as ‘standing on the shoulders of giants’ but it allows Aber to range not only in the emotional range of her family, but to show how poetry might also provide the emotional perspectives of other cultures in history.

Hard Damage is an immensely satisfying book. It charts immigrant experience in a way which is highly imaginative but also sustained and controlled. It will be fascinating to read what Aber writes next.