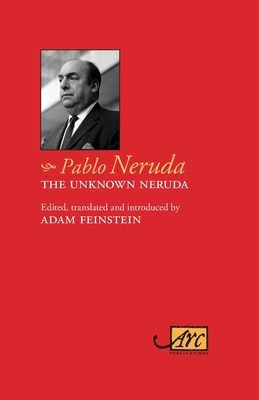 Described by Gabriel Garcia Marquez, who might be considered just a little parti pris, as ‘the greatest poet of the twentieth century in any language’, Pablo Neruda has had a multitude of translators. Such a great poet will always attract more attempts to ‘improve’ on the translations of the past. Another factor is that the language into which translation is carried out will, itself, be changing. Very few of us now look into Chapman’s Homer, though the acclaim for Pope’s translations still rings even now. But Neruda delivered multifaceted subject matter which was and remains ‘contemporary’. Thus, translations respond to that need for his poetry to stay contemporary. In part, this was because of the part he played in his country’s politics, the stature he attained at a political figure. Neruda was also a highly acclaimed personal and love poet, whose own relationships were themselves not uncontroversial.

Into these somewhat muddied waters, steps Adam Feinstein with a translation of what he calls The Unknown Neruda containing poems which, it is suggested, have, in the main, not been translated into English before. And the range of poems in this book does reflect the huge range in Neruda’s other work, from, literally the heights of Macchu Picchu, published in 1948, to the love poems, often fiercely intimate, which run throughout his career and even gave him posthumous fame via the film Il Postino. Feinstein’s own selection includes ‘Torrid Ode’, which lives up to its title, and ‘The Great Urinator’: you can guess that one from Neruda’s own Chilean experience, though perhaps more contemporary figures might also fit the bill! Then there are poems of intimate address such as ‘Words of Love’. So Feinstein has set himself the task of translating from and into often opposed registers. Since I do not read or speak Spanish, I have to rely on the ‘feel’ that Feinstein brings to his translations.

My delight was dismantled in the fertile abyss
and there I stood, suffering in the agony of thought.
(It was a drowsy song
draped in sad, soft silk,
slumbering in the sterile gash of the wind
and life clung on, in shreds, like
an abandoned tree)

Here we have a delight which is dismantled in ‘the’ fertile abyss; one fertile abyss picked out among, what, the infertile abysses? And the delight is confused perhaps by the agonizing plethora of thought brought on by the fertility of that abyss. The song, held in its parentheses ‘slumbers’ in the ‘sterile gash of the wind’, which is clearly not bracing, but is, somehow, ‘sterile’. The song, itself, drowsily slumbers being draped in the sibilance of ‘sad, soft silk’. The poem finishes with the line ‘Oh, the pain, the pain the pain of humble pain’. ‘Sterility’ might be a portrait of writer’s block, and thus its very existence is a contradiction in terms; particularly since Neruda’s output was always fluent. And we can see here part of Neruda’s technical command; the way in which he will play ideas against each other.

Bravely, perhaps, Feinstein translates some of Neruda’s third volume, tentativa del hombre infinito usually translated as venture of the infinite man. Although from very early in Neruda’s career, this book followed his hugely successful Twenty Love Songs and a Song of Despair, the book that really launched him as a poet are the ungodly age of 20. ‘venture’ was itself written when Neruda was only 21, and remained one of his own favourites. However, the audience that wanted more love songs was thrown by the ungrammatical and uncapitalized surrealism of venture. The result was a critical and popular failure which was only translated into English as a complete volume in 2017.

In this and the wilder of Neruda’s imaginings, Feinstein clearly comes into his own. Feinstein seems to invest real energy into these poems; and that is not to say that the other translations lack energy. It is in these poems, perhaps, that Feinstein is really interested. These are poems whose baroque quality takes on a fierce drive which takes few prisoners,

Here, Neruda appears to mimic the workings of the storm ‘outside’ with the workings of a storm ‘inside’. The unknown ‘you’ appears to be throwing themselves into some kind of suicidal pact with that storm, with the outcome being ‘total silence’. Here, again, we have the physical world depicted in contradictions; where the sea appears to unfasten stone in the air. The interpretations of these images as metaphors are likely to be legion and are interwoven with personifications of the oil light and the sea, so that the reader, too, is swamped by the storm and the agencies it seems to evoke in other objects.

Elsewhere, and later, perhaps, a plainer but no less strident tone comes into the poems. Feinstein translates a number of poems from Neruda’s collection The Grapes and the Wind from 1984. Such poems, written when Neruda was in exile in Europe, inevitably have a political even polemical feel to them. ‘The Police’, for example, begins ‘We’re from / the police. / And who are you? / Where do you come from? / Where are you planning to go? / Who’s your father? Your brother-in-law? / Who did you sleep with over the past seven days?’ This interrogation laces the rest of the narrator’s interactions through the rest of the poem. ‘And when I kissed Paulina, / on her beautiful cold mouth, / as she lay there, naked, in the museum, / she said: ‘Are your papers in order?’ Such a sense of the political infiltrating the personal culminates in the narrator reflecting, ‘That was how this book / took shape: surrounded / by sea and lemon trees, / I listened in silence / behind police walls, / to the courage of the people / struggling, then as now’.

This is a generous selection of Neruda’s work. It contains the politically engaged nostalgia that Neruda used when looking at and back on his native Chile and the other places he travelled in, in an important life both as a diplomat and an exile. His poem, ‘London’ adumbrates what was clearly an unhappy stay in a London that also comes across as a police state. These are rangy poems and Neruda is not afraid to sprawl and chew things over. Towards the end of the book are a number of poems from his last volumes which are just as political and personal as the earlier poems. What comes across here are the sheer connection that Neruda feels with so much of the world, from the poor of London – he certainly finds them there -, to the geography and customs of the city of Picatrihue. Even where it sometimes feels that they take some liberties with line orders and the syntax of some of the sentences, there is clearly a power and possession in Adam Feinstein’s translations.