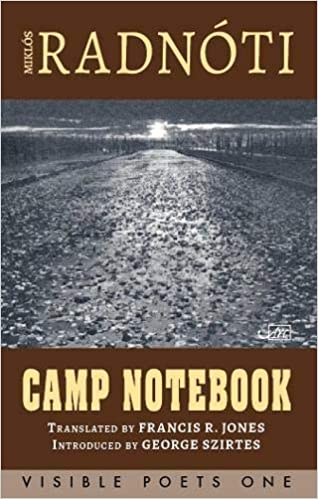 In 1944, the Hungarian poet Miklόs Radnóti was shot while being force-marched from the copper mine in Bor in Serbia towards Germany. His body, exhumed from a ditch after the war, was identified from the notebook in his pocket. That notebook is reproduced in facsimile in this text published by Arc in this country, along with Francis R. Jones lucid and moving translations of the poems it contains. Such facsimiles of the Camp Notebook were, apparently, available in Budapest much later. In this edition, they are reproduced in all their smudged glory, Radnóti’s beautiful handwriting running across or down the small, squared pages; plus the bottle label on which he wrote his last deeply poignant poem. Radnóti was a relatively well-published in his own lifetime and had published seven collections and a memoir before his death at the age of 36. He translated La Fontaine and Apollinaire into Hungarian and his early work is influenced by symbolism. Since his death, however, Radnóti has come to be seen as one of the great witnesses to the Holocaust.

In his introduction to the book, George Szirtes suggests that ‘what distinguishes Radnóti’s last poems is a turning away from the aestheticized or mythologised self to the brute world outside that he records with remarkable steady-eyed clarity. Gifted as he was in his earlier work, it is the camp experience that forces him to see beyond the limits of his own temperament.’ Szirtes goes on to comment on Radnóti’s preoccupation towards the end of his life with the Virgilian Eclogue. In the eclogues, according to Szirtes, Radnóti uses ‘the dialogue and … the pastoral … [as] a potentially public forum for discussing the ills of the time.’ Thus the classical form, that ‘tennis net’ that Frost demanded, allows Radnóti the formal control by which he is able to address even the darkest moments of twentieth century ‘life’.

The Camp Notebooks actually contain only ten poems. There is a group of four poems entitled ‘postcard’, plus that poem written on the back of a bottle label. They start with the ‘Seventh Eclogue’, which implies a form in which the poet was, seemingly, practiced. However, if Szirtes is correct and these poems ‘see beyond the limits of his own temperament’, then the persona of these poems still comes across as quite highly defined. And that is not necessarily a criticism. ‘Seventh Eclogue’ pictures the prisoners in their camp barrack as night falls. The poem begins with the narrator’s night time gaze looking to the edge of his vision: ‘the wild / oak fence, edged with barbed wire, the hut’s so floating. / A slow stare lets the frame of our bondage go / and the wire’s tightness is just in the mind, just in the mind.’ As Radnóti goes on to note, this kind of fantasy is as liberating for the mind, as sleep is for the body. The liberation is, however, deeply circumscribed. Not only is the narrator still awake but that very sleeplessness emphasises the contrast between the fantasy and the reality. In sleep, the prisoner has ‘the hiding-land of home’ but ‘Ah, does that land still exist? / What if a bomb has hit it?’ And the poet himself ‘groping’ his way like an ‘inchworm’ through his hexameter, will his writing be understood in that home? Not only is the writing possibly pointless but he, too, is ‘caged, and bug-ridden’. It is a poem which is brought to a halt with the certain knowledge that the writer cannot sleep without his lover.

There is, then, perhaps a tension in Radnóti’s looking beyond his own temperament. He sees the appalling physical limits of the prisoners, and how their fantasies and sleep transcend those limits. At the same time, it is Radnóti, himself, the writer who is ‘recording’ that transcendence, that seeing beyond; who is, perhaps, projecting the narrow focus of his fantasies onto the others amongst whom he sleeps. That is not, actually, to diminish Radnóti’s achievement. It is that narrow, appalling focus, which Radnóti brings so vividly alive.

Szirtes, too, picks out that image of the plum jam cooling. There is a deep pathos there. And also in that literal crie de Coeur, which pits the poetic sensibility of the writer against the reality of the world around him.