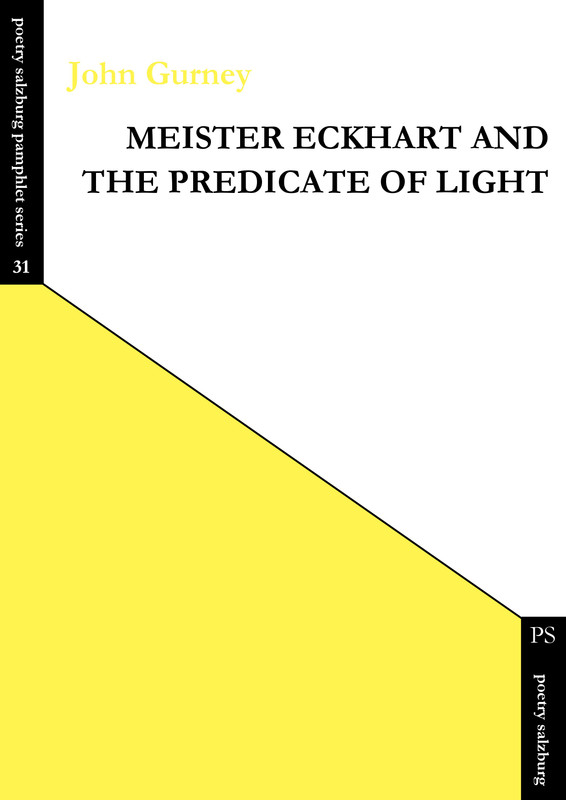 John Gurney was one of those writers, present in any culture, who become rather niche figures, rack up a small, focused succés d’estime, and then quietly disappear. So it’s greatly to the credit of Poetry Salzburg who’ve published much else of Gurney’s poetry that they have published Gurney’s sonnet sequence, Meister Eckhart and the Predicate of Light, some nineteen years after the writer’s death.

Gurney’s first full-length publication was Wheal Zion, published by Harry Chamber’s Peterloo Press in 1979. Wheal Zion introduced its readers to a poet who was a considerable formalist. Not only did Gurney favour the sonnet, but he was also a practitioner of the iambic pentameter; a practice which reached its apotheosis in Gurney’s 16,000 line epic, War. An ambition like that can come back to haunt a writer, and the appearance in middle of it of William Blake as the narrator’s spirit guide, can hint at something closer to hubris than ambition.

Wheal Zion, as its title might suggest, revealed Gurney’s interest in the mines of Cornwall. Its title poem depicts its narrator entering the eponymous mine to ‘experience’ ‘dripping naked’ the inner nature of the mine. The narrator also remembers ‘the law-suits and the writs, / the quarrels and dissention, formal lies / accompanying its history.’ Here, Gurney, as he suggests in Meister Eckhart wants the ‘ordinary experiences of life to return.’ At the end of ‘Wheal Zion’, the narrator emerges as a ‘transparent man, surrender[ed] to myself.’

That kind of quasi-mystical introspection is likely to get short shrift in our sometimes rather fragmented and febrile contemporary poetic world. Particularly, perhaps, when the poetry comes from an Oxbridge educated, ex RAF fighter pilot and college lecturer who died twenty years ago. On the one hand, the experiences that Gurney sought to depict, the kinds of romanticism which he and a few others, such as Kathleen Raine, Peter Redgrove, and Gurney espoused, are located in an undoubtedly privileged world, a kind of middle-class, couple-of-skins-too-few-ness. On the other hand, those poets and John Gurney here worked at their themes with a technical skill and commitment which seems increasingly side-lined.

John Gurney’s distinctive voice seems to have emerged early on, and the music in his writing does not change markedly over his career. The words of ‘Wheal Zion’ were as carefully disposed then as are the lines from Meister Eckhart. There is a quiet song in the lines and their rhythm, though held in a general iambic pulse, is usually calm and subtle. If anything, over the years, Gurney gains a confidence in a plainer utterance which does not diminish the states it seems to depict. The sonnet, ‘Frozen Vixen’ from Meister Eckhart, begins ‘Who spoke your form? What grammar fashioned you? / What alphabet exposed you on the snow / for slow interpretation.’ Gurney deftly holds onto the metaphor of language to describe the body of the fox in the snow. In the language, the persona of Eckhart seeks to articulate the form of the fox’s ending. Then at the end of the poem, ‘Your design / is terrible. I suffer, for I know / your cubs are slowly dying in the snow.’ There is a slight clang in the rhyme of ‘know / snow’, but it’s a risk which finishes the poem on the note the narrator needs, and there is something fine about that ‘Your design is terrible.’

The impulse of the whole sequence is one of profound empathy with the natural world, animate and inanimate. In the poem, ‘Stress’, a tree is ‘a paradigm of stress, / long gored by cows, tormented by the sheep, / it still persists, as stunted as a child / that’s exiled from samhadi, grins or weeps / according to its impulse.’ The writing is plain when describing the effects of the cows and sheep on the tree; then quite typically for Gurney, reaches out to ‘samhadi’[sic]. ‘Samadhi’ is a state of meditative consciousness. That Gurney will use such a word and associate it with a child is not unusual in his poetic process. The early mining poems illustrated above are never afraid to use the specialized language of mining. However, whether any but the most unusual child has access to ‘samadhi’ is a moot point. But Gurney’s use of the term is not just a self-conscious tic, it is his unabashed focus on the right word. Gurney will pull us into his world and we have, to some extent, to buy into the language which is necessary to create that world. Earlier in the poem, the narrator stops by the tree, ‘deconstructed’ by it. Elsewhere, he writes in the poem ‘Duality’, ‘Yes, Eckhart, that is true. Only a / sensual spirituality is / non-dualistic. To be moved by the / disaster of the mist, its loss of bliss / is good.’

Such writing with its theological references and odd line breaks may simply be off-putting; although Auden pointed out that Marianne Moore’s breaking of the line on unstressed articles actually creates emphasis on the first word of the next line. But that move into the beautiful commentary on the mist is, perhaps, a finesse worth waiting for. The whole of this very moving sequence is studded with precise and evocative writing, such as this from the poem, ‘Cobwebs’

The cobwebs, trembling, stretch between the beams
like a fine fan. They seem to levitate
on the faint breeze. They’re stretched out like a dream
of flying.

Gurney possibly wrote too much and developed a fluency which, however enviable, produced an occasional slightness and surface facility. But inside that fluency was a profound empathy for the world and all its ‘things being various’ that should be attended to. There’s much to return to in John Gurney’s work and Meister Eckhart and the Predicate of Light is a lovely addition to the poetry of a writer who is neglected too easily.