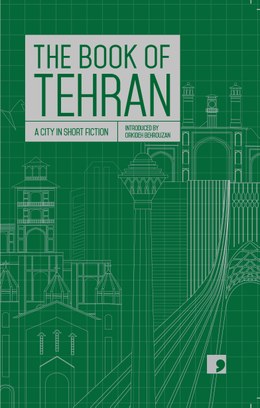 Comma Press’ ‘Reading the City’ title series is rapidly filling up with quality collections, each more intriguing than the last. As they venture abroad to cities so often overlooked as creative hotbeds, these collections are not only an impressive logistical feat, nor merely an exercise in the fine art of translation; they are testament to the determination of one independent publishing house to shed vital light on the lives lived beyond our own. The Book of Tehran is one of the most important additions to the initiative yet. Orkideh Behrouzan puts it best in his excellent and insightful introduction to the volume:

‘In the absence of the groundwork that should have already taken place […] anthologies like this one offer a rare journey into the Tehran that is persistently made invisible, immaterial, and unimaginable in the West. Great fiction doesn’t disguise: in revealing contradictory emotions and contrasting worlds, it urges us to imagine and to challenge what we assume we know about people.’

And The Book of Tehran is certainly rare. It would be easy to expect these stories to be filled with the tumultuous history and politics of the place, but in fact, it is full of people. Complicated, emotional, often familiar people. A newly-single man, a little girl reluctant to learn piano, an over-controlling aunt. These are stories which shouldn’t surprise us, but they do, simply because we have learnt to view cities such as Tehran as worlds apart from our own ordinary lives.

Of course, there are stories here that are by no means ordinary. One noticeable trait in many of these pieces is their bold engagement with the act of storytelling – in a way that often feels fired by oral tradition. In Wake It Up, by Payam Nasser, the young writer’s narration is threaded with phrases like ‘Believe it or not’, creating a sense that we are being spoken to directly: the story is specifically being told to us. The same can be said of Mohammad Tolouei‘s Mohsen Half-Tenor, in which our narrator considers the way he should best give us the details: ‘This is an old story now, but I should probably start it from this particular scene.’ There is an ease with which so many of these stories do not ‘disguise’ themselves, but embrace the storytelling form, and so welcome the reader into their parameters. The result is that many of these insights into the city of Tehran feel closer than we have ever been. The News on Sunday in their review of the collection put it perfectly: ‘Perhaps this is how the stories of all cities should be told — so intimately that there is no need to announce where you are.’

A prime example of this intimacy is Mohammad Hosseini’s Circling That Heavily Burdened Tale. Opening with the line ‘As I mentioned before, everything started with that picture’, immediately places us – quite literally – in the centre of the narrative, no prior announcement needed. ‘You don’t know what an exciting picture it was.’ The confidence of this opening is magnetic.

And this kind of confidence continues throughout the collection. A number of the translated stories play with style quite strikingly. Sunshine, for example, (Kourosh Asadi) takes the form of an un-paragraphed stream of speech, casting its reader as the speaker’s various addressees. As our narrator reels off his story, littered with phrases of ‘she said’ and ‘I said’, the familiar and direct tone puts us there in the taxi with him, or later, as the rain pours, sharing a solemn cigarette.

These stories are not simply showing us Tehran through a window, they are inviting us in through the front door. Hamed Habibi’s In the Light Being Cast from the Kitchen places us at its very centre as we read. ‘You want to go back there’, writes Habibi. ‘You squeeze your eyelids shut and try to stay in touch with the last few moments of that dream, but it’s like tying off a bungee rope just at the moment when it snaps out of your grasp.’ The piece is unsettling in the best of ways, filtered so carefully through the nocturnal mind, and transporting us to that strange mental space we’ve all of us visited.

There is a stylistic freedom to this collection, and a simple enjoyment of the short story form. Domestic Monsters by Fereshteh Ahmadi unfolds brilliantly through the written letters of a woman coming to terms with years of hidden manipulation from her aunt. And Betrayal: short but stand-out, Azardokht Bahrami’s piece plays with the forms of script and story with a single tight and comic scene. Like a script, the action is told with impressive economy, giving us plenty to enjoy in only a few pages.

One of the more – for want of a better word – traditionally-wrought pieces in this collection is The Neighbour. Amirhossein Khorshidfar has a lightness of touch that instantly dispels any notion that this might be a region lacking in literary achievement. The achievement is there, absolutely, and it is being showcased in this collection.

These are all stories presented through various human lenses, all inviting us into private lives we may be surprised to find are, often, not unlike our own. Perhaps one of the most transparent insights into the city, is Goli Taraghi’s The Other Side of the Wall. Seen through the eyes of a fourteen-year-old girl who is forced to attend much loathed piano lessons, this story is free of all adult biases or cultural taboos. It is the unaffected perspective of a child looking up from the inside, rather than the limited and often prejudice perspective of one looking down from the outside.

In The Last Night by Atoosa Afshin Navid, we have the only substantial inclusion of a ‘Western’ world beyond Tehran, in the form of a brother, now in Canada, encouraging his sister to join him. It would be easy to assume that here, finally, was the narrative we expected: that of a repressed young woman dreaming of a better world. What we have, however, is the complex relationships of a group of female students, all battling with their various views of the lives which lay ahead of them. The story is expansive, branching, and the narration layers time and memory in a way which, though clever, can at times be confusing. It is a cross-section of young female experience, full of questioning and conflict.

This is not to imply that The Book of Tehran is without its faults. There are stories here which may not offer the catharsis or satisfaction which readers often crave; as Behrouzan warns in the introduction, these tales are not black and white, nor are they easy to contain. As with almost every anthology of various writers, the reader’s interest will ebb and flow, with some stories speaking more loudly and lodging themselves more deeply than others, but this is made even more difficult by the challenge of translation. When not only a language, but an entire culture, is having to be translated, some layers of depth can be lost. A short story holds a lot with very little – it is a form which often relies upon certain accepted truths to signal further meaning. As a result, it should come as no surprise that in the process of bringing these works to a British audience, some of the stiches in their embroidery may have been dropped – though that will also vary between readers. The task of the translator is a vast and challenging one, and every effort that has been channelled into this collection should be thoroughly commended.

Orkideh Behrouzan writes that ‘Tehran is an impossible tale to tell’. He is right in that ‘over-simplified’ Western accounts have clouded our vision, and that no single story can encompass a city of such depth and multitude. But it is a tale that is being told every day in the place itself, and what Comma, and these writers, and these brilliant translators have done, is invite us to listen to a few fragments of this city – and that’s so much better than nothing.