David Cooke | Staring at a Hoopoe | reviewed by Ken Evans 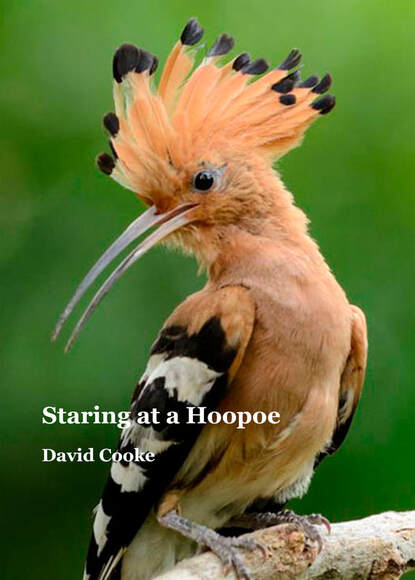 It’s a confident poetry practitioner who opens a collection with a villanelle. The challenging form divides opinion in contemporary poetry, of course, with some saying the last word was had long ago by Thomas and Bishop (with perhaps, an almost grudging acceptance of Derek Mahon’s ‘Antarctica’.)

But there is a magisterial (he is an ex-Head of Modern Languages in a comprehensive), and stately dignity to Cooke’s poetry that justifies the high-wire act of starting with one. ‘Feeling the Fear’ takes the sloganistic, car-sticker maxim of ‘feel the fear and do it anyway’ for its repeat refrain and pulls it off with gusto. The contrast between its’ epithetic vernacular and the more self-consciously poetic – indeed, in this exemplar, almost Shakespearean register – in the poem where, ‘Lacking the confidence others display,/you sense darkness creeping beyond what seems/to be. Feel the fear and do it anyway,’ works well in contrasting the one with the other.

This opener is a philosophical poem which reflects the Staring at a Hoopoe titular poem. A hoopoe is, at best, an ambiguous bird in myth: as Cooke’s poem says, a ‘harbinger of spring/or a bird whose piping/mnemonic call/is like a final summons.’ In Persia, a symbol of virtue; in Northern Europe, regarded as ‘thieves’ or even heralding death. And differently again, regarded as sacred by the ancient Egyptians. So the hoopoe becomes an interesting prism in which we see that which we want to see, relative to, and determined by, our predispositions of culture, outlook, ‘mind-set’. Cooke exploits these ambivalences with ingenuity in a poem where an old man and a hoopoe are engaged in something of a ‘who blinks first’ eye-gazing contest.

However, philosophical query is not the first impulse of these sure-footed, adroit poems. Perception and empiricism dominate in closely-observed poems like ‘Swallow’, where the diver from a pool board, ‘absorbing/its spring./Heel raised,/arms outstretched,/ she senses/that this/is all that/she can know/of flight….her back arched/taut as a bow,/she breasts/the air,/craving its pull –.‘ These tight, short lines express the edge-of-board, miniscule muscle movements of the simultaneously propulsive and swallow-dive action of the descent through air, enacted before us, beautifully.

At the core of this collection are ten poems about the life of Gertrude Bell, the archaeologist, linguist and cartographer, credited with drawing-up many of the boundaries of Middle East countries such as Iraq and supporting their growing toward ‘nationhood’. These modern resonances were explored by the RSC in Khalil’s play, ‘A Museum in Baghdad’, which I saw. This helped my sense of historical background, but in the poems alone perhaps points-up the challenge of how much narrative and context are, at once, both needed and useful, but also impinge on the poetic thrust. The explanatory values in prosodic ‘scene-setting’ may seem intrusive harnessed to a poetic cause for some, and a readers’ willingness to ‘go with it’ may depend on their interest in the subject-matter, rather than the persuasive strengths of the poetic register. That said, Cooke has made me want to know and understand more about an extraordinary character who was so out, and ahead, of her own time. A thoughtful, stimulating and assured collection.