Dunya Mikhail | In Her Feminine Sign | reviewed by Ian Pople 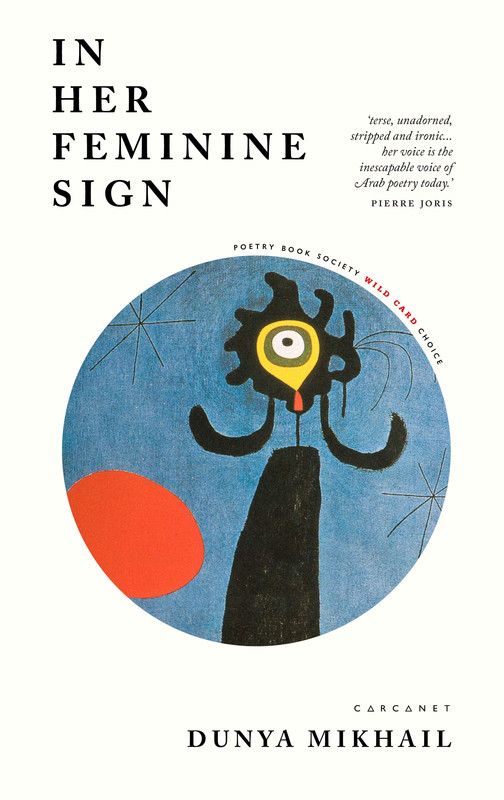 The word ‘luminous’ is used on the back cover blurb to Dunya Mikhail’s new collection, In Her Feminine Sign. And ‘luminous’ seems apposite; there is a clarity and directness to the poems here which does seem luminous. There is also the sense that the poems illuminate. And the illumination is of the processes of a life lived between cultures. Mikhail was brought up in Iraq, but now lives in the US; is of Christian heritage, but grew up speaking Arabic and living amongst Muslims. In the introduction to this book, Mikhail comments that the poems emerged in, literally, two directions; written across the page from right to left in Arabic and then from left to right in English. And perhaps that sense of two writing processes at work animates the dynamic of these poems.

The poems range between longer descriptions of people in/and places, to shorter pieces that Mikhail suggests are an ‘attempt to write Iraqi haiku’. But what connects the poems is the way Mikhail explores processes and their accoutrements, their spin-offs and accessories. In ‘My Grandmother’s Grave’, Mikhail delineates aspects of her grandmother’s life, ‘her bed on our roof, / the battle of good and evil in her tales, / her black clothes, /her mourning for her daughter / killed by headaches, / the rosary beads and her murmur, / Forgive us our sins.’ Mikhail then moves on to the Sumerians, the first known civilization from the lower Mesopotamia area, ‘their dreams inscribed in clay tablets’. The juxtaposition of Mikhail’s grand mother and the Sumerians runs the processes of a life and the processes of a civilization against each other. The comparisons are, obviously, not simple ones but Mikhail shows the individual and the collective developing, even where that development is not, and cannot be, smooth. Later, in this tale, ‘the clouds descended on us / war by war.’ And with the wars, the barbarians who ‘broke my grandmother’s grave – my clay tablet. / They smashed the winged bulls whose eyes / were wide open / sunflowers.’ Mikhail’s purpose here is not simply to show how the personal is the political; her purpose is, perhaps, to suggest how the locations of the personal and cultural become one another. Even where there may be thousands of years’ difference in time, this mutuality is true not only of Iraq but of everywhere. As Mikhail puts it at the end of the poem, ‘My hand brushes the map / as if rubbing an old scar.’

The four sections of part two of the book, ‘Tablets’ offer Mikhail’s Iraqi haiku. Here, too, Mikhail is much concerned with process, albeit on an often tiny scale, as in ‘I don’t care under which sky – l just sing your song till the end.’ And it would be very easy to point out that such poems can always verge on the twee; the criticism of Instagram poets like Rupi Kaur shows how poetry can be seen to be stripped of its essentials in the effort to be instantly appealing. The fact that Mikhail’s ‘Iraqi haiku’ are usually successful, is due to her ability to pull the personal and the cultural together so that the process emerges from their proximity. And, yes, the poems are also a profound reflection on the clouds descending on Iraq, ‘war by war’. But Mikhail’s poems explore the moments of transcendence in all that. For every one of these short poems, which has a slightly propagandist lilt to it, such as, ‘Ask not how many houses were built. / Ask how many residents remained the houses’, with its conscious echo of John Kennedy; there are several small jewel like pieces that are truly luminous: ‘The sun reveals / a hole in the boat, / a glow in the fins / of fish still breathing.’ Or, ‘The lanterns know the value of night, / and they are more patient / than the stars. / They stay until morning.’