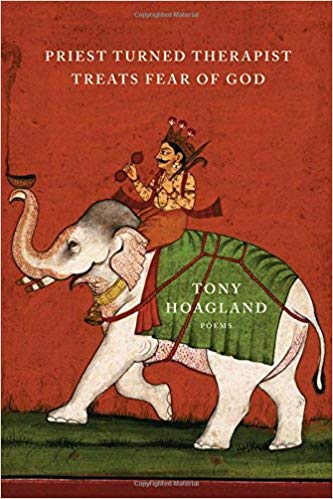 Tony Hoagland once commented that he would position his writing between that of Sharon Olds and Frank O’Hara, between the confessional and the social. For a poet, who’s most lauded book was called What Narcissism Means to Me, that yoking doesn’t seem out of place. It feels certain that the ‘I’ in the poems in the book under review, Hoagland’s last before his untimely death two years ago, is Hoagland himself. If there are personas present in these poems, then the personas feel very close to that of the writer, the authorising consciousness of the poetry. That sense of intimacy supports, perhaps, Dwight Garner’s comment that ‘At his frequent best … Hoagland is demonically in touch with the American demotic.’ The poems do sometimes feel inhabited by demons. And the title of this new book is nothing if not ‘in-your-face’; is Hoagland, the priest, the therapist, or even the ‘fear of God’?

One of Hoagland’s demons, and one he is expert at honing in on, is a particularly deracinated and irritated sense of masculinity. The poems seem to reach out to that particular kind of selfhood, and then reflect that energy in the address of the poem. In ‘Dinner Guest’, for example, Hoagland creates a female dinner guest who, visiting ‘the ladies’ room’, opens the medicine cabinet and finds ‘a bottle labelled Male Enhancement Formula’. Hoagland then creates the female guest’s thoughts,

Is this the funny little thing, she wonders,
that has caused so many wars? so many
murders and exploded buildings?
so many smashed-down doors and refugees?

The poem’s narrator/Hoagland then comments,

And in a way, of course, she is correct. The need to
engineer an outcome, the desire to
feel confident that what you want to happen
will happen when you want –

and then at the end of the poem, ‘the men are saying / that injustice can be eliminated.’

All this is, of course, a dangerous strategy: Hoagland’s male attempt to assume a female personality and then a ‘female’ interpretation; that sense that the poem is an attempt to pre-empt that interpretation. These might be seen as yet another attempt to ‘mansplain’. And those final two lines might not necessarily be ‘ironic’, since it is a male writer who is attempting to ironize. There’s a lot of hubris in there.

However, other poems avoid that kind of trap and are much more successful at accessing a more contested sense of masculinity. Hoagland’s ‘Rain-father’ posits a son sending a letter to his father, ‘sick, maybe even dying far away.’ Hoagland creates a, perhaps, ‘standard’ scenario in which the son feels guilt towards the father. Here, however, Hoagland has the ability to particularise that guilt in good, affecting ways,

‘good enough if you manage to conceal
your rage, which has no reason anymore.

Tell him no matter how far off you are,
you are always living in his country;
tell him you yourself are an envelope
mailed from his address,

posted with a stamp that has his face on it.
He is the language that you use
when you speak harshly to yourself,
trying to hide the fact that you are lost.

Hoagland’s ability here, is to work the trajectory of the poem from its beginning, ‘It is the kind of faint barely falling drizzle / in which you write a letter to your father’ through the modulation of that, ‘In your letter your description of the rain / must be affectionate in tone, / to suggest a basic cheerfulness of heart, / but wet, to suggest your consciousness of pain –

There is no doubt that Hoagland is good at a sense of reaching out to the Other. As we have seen, that reaching out, Hoagland’s reading into the consciousness of the Other, can feel a little jarring where that reaching out might be a kind of colonizing as with ‘Dinner Guest’. But Hoagland’s poetry is driven by a real attempt to empathize. In ‘Rain-Father’, there is sympathy for both the father and the son.

In ‘Upward’, which begins the final, fourth section of the book, writes with some envy about his friend Jack, who, ‘With the help of Zen … dissolved his disagreements / with the world, / purified his quarrels, // shushed his ego, /stopped biting back / when bitten’. At the same time, Hoagland’s sympathy is with those left behind when others, such as Jack, have floated ‘Upward’. Thus, he comments with some asperity at the end of the poem, ‘leaving a few / hundred million of us / behind, / weeping and holding on / to our vanished friends,/ our stormy weather, / and our extended // allegiance to stones.’ In the end, perhaps, Hoagland speaks to our need to deal well with the world and others, and the way in which such aspirations will often, if not usually, fail.