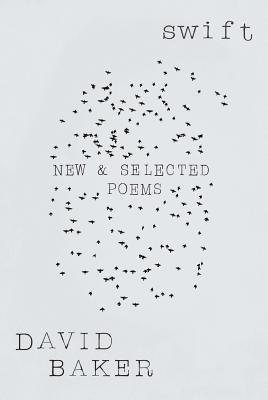 David Baker’s first Selected Poems, Treatise on Touch, was published by Arc in the UK in 2007. Treatise on Touch introduced the British poetry public to that rarer American poet, the formalist. If there is an obvious lineage into which David Baker fits, it is the Anthony Hecht/John Hollander axis of 20th century American poetry. That is not to say that Baker is not capable of fine, and finely calibrated free verse; however, Baker’s natural inclination is away from the long-lined, loose-limbed verse of, say, Ashbery and Donnelly. Baker’s temperament is much more towards the condensed and the lyrical. Like Baker’s other Selected, this book is arranged in reverse, Merlinesque, chronological order. That arrangement is, I suspect, to show us where the mature work of Baker has come from, with the emphasis on the current. It was often the lament of the great jazz musicians, Duke Ellington and John Coltrane were two, that listeners were only interested in their past ‘hits’. As Ellington put it, ‘What I do tomorrow will be the best thing I’ve ever done.’* Of course, the reader of this volume does have the choice of starting at the back and thumbing forward, or accepting Baker’s arrangement for the emphasis he gives it. In addition, as is the way of these things, poems that were in the earlier Treatise on Touch have been winnowed out of the new book. Thus, in this volume, Baker has left out all the poems from his first book and severely curtailed the representation of subsequent volumes. There are, however, fifteen new poems which ‘preface’, so to speak, the other selected poems.

Another major difference between Baker’s work and, actually, all of the other writers named above is that Baker is much more of a nature poet. And Baker is the kind of nature poet who sees himself in that tradition. The notes of this volume mention Emerson, in particular, his great essay, ‘Nature’, Virgil, in particular the Eclogues. There is also something of the feel of A.R. Ammons and Wendell Berry about some of these poems, even if Baker eschews Ammons’ easy-going, fluid style. That feel for nature has been in Baker’s work from the beginning. And part of his sense of his writing in that tradition is the way he will quote, sometimes extensively, from earlier writers. For example, one of the fine poems that Baker has excluded from the current volume is ‘Ephemerae’, which describes the rise and swift death of these insects and also quotes from the eighteenth-century American naturalist, William Bartram.

The earliest of Baker’s poems in this volume is ‘Haunts’ in which Baker reflects on the discovery in mountains of the body of a hunter some 27 years after his disappearance. The discovery coincides with Baker’s 27th birthday, whereupon Baker explores a sense of haunting. The poem contains Baker’s trademark, lovely phrasemaking, ‘puffing hard, a ghost / of breath shredding in the wind’, ‘The snow packed deeper / into the breaking shapes / of the firs’; and finishes with the following:

He will stay there

finally too cold to shiver,
relaxing, gun on lap,
and look over the beautiful, sweeping
emptiness the world has become
for all of my life.

In the middle of this, is a passage in italics in which Baker as narrator recites episodes around his birth, in particular, the baby’s interaction with the elderly landlady. This poem illustrates another of Baker’s skills, which is the way in which he handles the mixing and mixture of registers. In this poem, it is a delicate shift from one narrative to another.

In the middle of Swift, there are poems from the individual volume, ‘Midwest Eclogue’. The reminiscence between these poems and Virgil’s originals is emphasised by David Baker’s placing of human concerns in the midst of landscape. However, where Virgil’s Eclogues were often reflections of the ars poetica, itself, and its virtues and vices, Baker’s ‘Midwest Eclogue’ shows people simply in thrall to the natural world. This dependence is often of the conservationist kind; the figures in this landscape are often desperate to protect it. In the title poem of this group, the narrator works to rehabilitate a ‘dying’ pond, next to his property. Actually, the feel of most of Baker’s work is that the first-person narrator is Baker, himself. And, as with the other poems in the group, there is a detailed description of process, of the actual getting one’s hands dirty in nature. In the pared, stepped lines of this poem, we are told,

In other, less-skilled, hands, the focus on the scientific register would seem simply that. Here, we can see Baker placing the language within a controlled context, ‘the darkening perimeter’, itself using a scientific term. And it is not only the breaking of the scientific names across lines, or the actuality of the formula, but the way the terminology leads into that final devastating quotation. Baker shows the reader the relationship between language of the terminology and the jargon of environmental destruction; it is almost the language itself which leads to the destruction of the bees.

Some of that sense of how language both mirrors and enables dysfunction is shown in the poem ‘Five Odes on Absence’. The first of these ‘odes’ reports on a poetry reading at which poets ‘”…read from / and display their latest or landmark e- / rasures.“ Which means: take Dickinson, rub / some letters our, you can be famous, too.’ It is clear that such a poetry ‘procedure’ has got Baker’s goat. However, that kind of cheapening of technique starts Baker on a reflection on the way other absences are present in lives. One of those kinds of absences is in the life of John Clare, another writer whose letters pulled out the vowels, and whose notebooks and drafts are full of the search to find the right word to counter absences, lacunae as we would call them now, in the ability of language to make precise. Baker feels that Clare’s sense of absences in the natural world and in the friendships he once had are mirrored in the rage of the narrator’s neighbour’s son, Bernard, whose mother is absent. And there is an aesthetic similarity, too, in the still lives of the painter Giorgio Morandi with his famous paintings of bottles and jugs; ‘painting / everything around the bottle but not / the bottle. This is how it always is. / Wherever I am I am what is missing / … I feel I am – I only am / And plod upon the earth as dull and void:’ It is as if Morandi’s still lives, for Baker, portray the loneliness of John Clare.

There is from the beginning of Swift, a very strong sense of Baker’s identifying with Clare, whose profound empathy with the natural world animates so much of this writing. And if this empathy finds its context in a world of climate change and loss of habitat, Baker’s purpose is to celebrate that natural world in the way that Clare did; to value its fragility and its strength, and to look to nature for a kind a guidance, a way forward.