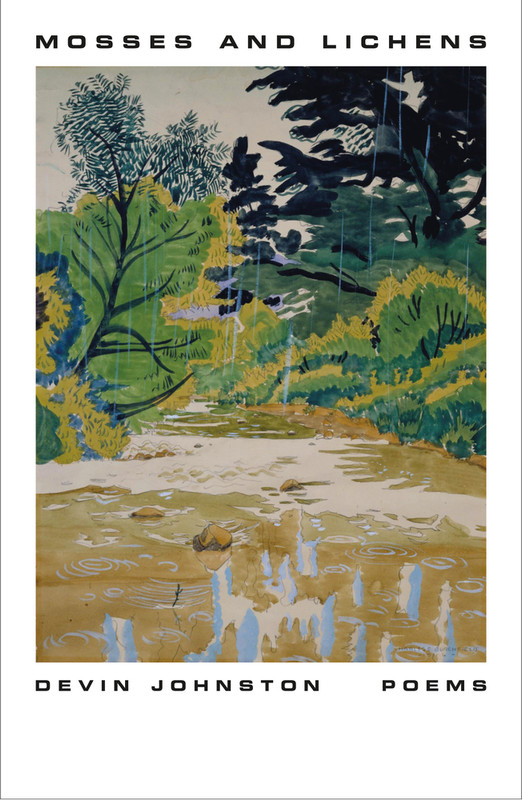 Over six volumes, Devin Johnston has built up a quiet body of poetry which contains astonishing power. If Johnston has concentrated his careful gaze on the natural world, that has never been to the exclusion of the human presence in that world. Nor has his writing excluded humans and their colourful lives. In his last volume, Johnston reported the conversation and presence of his neighbour on a plane flight. Johnston’s recall of the woman’s rather over-wrought character and conversation showed that Johnston was just as adept at viewing human life as he was of the natural world. In Mosses and Lichens, Johnston’s sixth book, his gaze is directed almost as much on human life as it is on natural life.

Johnston’s poems also reference a wide range of classical authors from Kafka and Catullus, whom Johnston has translated, to Isaac Watts and Isaak Walton. And yet, as with all Johnston’s writing, these references emerge out of the lightest touch; Johnston is never a poet that will brag about his learning. In this book, two ‘imitations’, to use Lowell’s term, are versions of Ovid, one, a splendid ‘Actaeon’, where Johnston’s rhythmic control drive the poem through all its, to us, usual drama. But even here, Johnston cannot resist a little moment of rest even as the drama reaches its well-known climax. In the final stanza, Johnston comments from the point of view of the fatally changed Actaeon, ‘Of course, he’d rather have missed out, / and he would rather have seen than felt / the dreadful things his dogs had done.’ Those ‘would’s and the final ‘dreadful’ offer a bathetic irony. And, perhaps, that irony is the irony of the maker commentating on the made, the poet looking askance at Ovid’s content. ‘Actaeon’ is followed later by a version of Icarus; so Johnston is not afraid of re-ploughing the well-ploughed field. But, as we have seen, there is a quiet delving into the interior of the myth which makes the myth feel deeply human and personalised.

The title poem of Johnston’s new book, Mosses and Lichens, begins with a quotation from Pope’s Moral Essays, ‘Grant but as many sorts of mind as moss.’ And there is an obvious sense that the mind of the poet is to become various as things are various. Thus, when Johnston goes on to adumbrate a range of mosses, there is a nod towards the many kinds of poet, but it is never more than a nod. Johnston ends that poem by depicting Ruskin lifting a stone and seeing the humus from the dead vegetation which had accumulated beneath it, ‘remains that steadily accrete / beneath the bright ascending crest.’ Here, the association is not, perhaps, with the bathetic sense of one writer’s remains among many. The association is with the mind’s growth in its inhabitation of the natural world; the mind’s ability to both absorb and reverence. Then, perhaps, the need for humans to pass on!

If in the title poem, Johnston picks up on the need for humans to accept their place in the created order, in the poem, ‘Friday Night’, Johnston reports on human need in a natural place. He describes a campsite on a Friday night, as the humans move into the natural world for what that might bring. One ‘discordant’ couple of teens ‘ill prepared, a little stoned’ retire (after the comment, —Why’d you even come / when all you do is bitch,) to what is, perhaps natural to them, ‘At the edge of quiet hours, /the girl begins to moan / Fuck me! Fuck me! over and over / across adjacent sites / for everyone to hear, /… asking and getting / simultaneous but not the same.’ If Keats was the poet who understood and responded to embarrassment, then Johnston, here, places that embarrassment in the twenty-first century context. This is a context in which embarrassment has become part of universal discourse, witnessed in every environment from a campsite in the American landscape to the live stream worlds of Big Brother and Love Island.

In his essay collection, Creaturely and Other Essays, Devin Johnston comments, ‘If anthropomorphism interprets the world in human terms, we can with patience arrive at its inversion: not humanizing but creaturely.’ Although, as noted above, there is a subtle turn towards the human in Mosses and Lichens, the book is threaded throughout with as fine a set of ‘creaturely’ observations as Johnston has written. Towards the end of the book is the lovely poem, ‘Above the Hawkesbury’, in which Johnston revisits part of Australia that he’s visited three years before. The visit brings out some of the very best of Johnston’s wonderful poetry.

As night falls on Illinois
and the home we left unlit,
three black cockatoos
cross the dazed morning:
their flight buoyant and level,
they swim through wedges of sunlight
to settle in frangipani trees
with a weird wylah wylah,
calling back the forgotten names.

It’s not simply the careful, poised choice of adjectives, or the apposite verb ‘swim’. What works so well here is the way that final line both brings in the writer’s perspective of memory returning, specifically that writer’s trade in the precision of names. And the meaning of the line washes back up the page; we have been given the names, but Johnston also acknowledges the fragility of the whole enterprise. It is too easy to forget not only the names but also the creatures the names bring us.