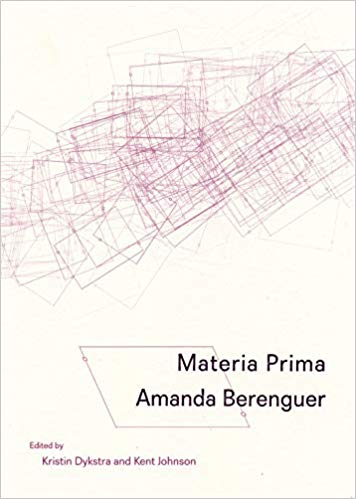 Materia Prima is the first extended single publication of Amanda Berenguer’s poetry in English. Berenguer was born in Montevideo, Uruguay in 1921, and spent much of the rest of her life there; although she did have extended visits to the USA and Europe. Her editors cite her as an important member of the Generación del 45, a group of Uruguayan literary figures who emerged as roughly the same time. It is clear from even the short biography accompanying this volume that Berenguer was both precocious and prolific; she published her first book when she was nineteen and the contents page lists some twenty four collections published between that first volume and her death in 2010.

That large quantity contains a huge range of forms and attitudes, and this Selected is a compendious collection. There are a number of long poems here including The Lady of Leche, an extraordinary meditation on what it means to live in the twentieth century in the swirl of cultural histories, but also to have a domestic and female identity in the same period. However, ‘meditation’ would suggest a serenity which this tumultuous outpouring often doesn’t have. It begins:

To suggest that this writing is surreal is not quite right. It is true that there is a yoking of images with a kind of violence. At the same time, as we can see here, that yoking has a hard-fought precision about it. And, as the editors contend, there is a sensuality and authority about the writing which gives it heft and presence beyond the surreal, bricolage of images. The stringing together of the phrases which follow the second Amanda, above, seem both to juxtapose with an interesting resonance. How do you have ‘cow eyes’ and also a ‘blackbird heart’; there’s an implicit contrast in physical weight between the cow and the blackbird even when the epithets are attached to ‘eyes’ and ‘heart’. And yet the heart certainly runs on its own electricity so that ‘lightning bolts’ doesn’t feel far-fetched. In addition there is the translator’s miraculously subtle alliteration of ‘cow-eyed’ with ‘contemporary deity’, which, again, creates subtle links in the music.

The editors of this collection claim ‘objective specificity and phenomenological tracking’ for Berenguer’s writing throughout her writing career. And they are right. The collection, Composition of Space, from 1976, contains a series of poems, ‘Sea-sunset from (Day and Date, 1972)’. These poems are a kind of equivalent of Monet’s paintings of Rouen Cathedral, an essential difference being that three of the poems are dated on consecutive days in February, 1972. The four poems begin as follows: ‘Molten lead the air falls’, ‘Vast blue / becomes ambiguous green’, ‘A lone fleeting fruit / disproportionate’, and ‘The entire day from ripe zenith’. Each of those opening lines then becomes the title for a concrete poem which explores the kind of movement that Berenguer sees in the sunset. Each of the ‘conventional’ poems that follows those openings is a patient and forceful exploration of the scene thrown up by the ‘sea-sunset’. The first of these is a single sentence whose first nine lines are: ‘Molten lead the air falls / stone the sky falls/ over the bitter and black / saltwater it falls / we’re here to peer / into the deepest well / the dunes pile in / some crawl / spacious turtles of silence’ Of course, the lyric poet in the twentieth century lives with the legacy of objectivism and modernism. But Berenguer’s determined gaze creates portraits of considerable depth and beauty. And she creates a seemingly effortless combination of space and intimacy. Here, the air is yoked to lead and stone and the sand dunes to ‘spacious turtles’. Again, the translator renders Berenguer’s Spanish into these lines of, often, monosyllables with the rhymes of ‘falls’, ‘well’, ‘pile’, and ‘crawl’, moving to the cadence of that last quoted line.

Berenguer’s determined gaze is turned on her own aging body in the suitably titled, ‘A Study in Wrinkles: Contributions to the Field of Cosmetology’. As you might imagine, this is both physically and psychologically detailed. However, Berenguer turns the female gaze not only on the female body but also on the way men relate to that. The poem is a set of 63 prose sections, and number 31 runs as follows:


The earlobes have fewer wrinkles because they don’t have anything to do.

They can do nothing, and the sound still gets in.

The mouth, on the other hand, gets wrinkled because it works so hard: it opens and closes the door all day long: it’s the porter for supplies and the porter for words.

The eyelids are specialized porters for the light that comes in and the gaze that comes out. Eyelids get much more wrinkled: they have the task of guarding the lighthouse on the sea.


Again we have here, Berenguer’s ability to push an idea. In the first three parts, the observation is interesting and in the context of the whole offers a deeper excursion into her investigation into wrinkles and the female condition. However, these observations are not Berenguer at her most original. The final section here moves into a larger metaphorical sense of the job of the eyes, themselves; that the eyes allow us to be aware, not only of danger but the way our awareness can guard others through our own presence. But then comes the twist of the knife:

32)
The wrinkles that men wear on the inside of their skins are called obsessions.

33)
The little obsessions are internal wrinkles in the form of trained monkeys, from which it      follows that wrinkles and training are the same engine.

As before, in part it is the plainness of the language in these translations which make them effective. But, just as much, it is Berenguer’s intellectual imagination, which reaches into the ideas and carves out these neat, particularised little places; places where the ideas and her take on them resonate not only with irony but also with a piercing sense of their fitness, the way Berenguer makes them apt.

Materia Prima is an important document which introduces the English speaking world to a poet of huge technical and emotional resource. The translations seem excellent and contain a range of felicities which allow Berenguer’s poetry to both breath and reach out.