Michael Schmidt | Gilgamesh, the Life of a Poem | reviewed by David Cooke 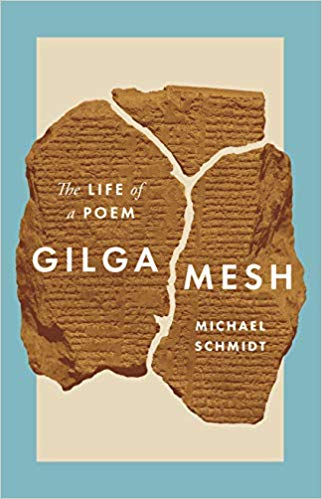 The long poem known as Gilgamesh or the Epic of Gilgamesh is the most ancient literary text we have and the earliest surviving work of literature that has the power to move and inspire us. It predates the Iliad and the oldest biblical texts, both of which it may have influenced, by a thousand years or more, though its origins go back even further to a long-established oral tradition.  Yet it only came to our attention when archaeologists discovered it on a set of twelve very damaged clay tablets in 1853. Subsequently, further scattered fragments have been found. As a publisher, Michael Schmidt deserves credit for having published, in 2018, Gilgamesh Retold by Jenny Lewis, one of the most readable and skilfully reconstructed versions of this foundational text. He has now gone one step further by writing his own comprehensive introduction to the poem. However, Gilgamesh, the Life of a Poem, is, as we shall see, far more than a mere layman’s guide to a long-lost and seemingly obscure literary text.

One of the many fascinating aspects of this book is that Schmidt, uniquely placed as one of the foremost publishers of poetry in the English-speaking world, canvassed fifty poets in order to discover what Gilgamesh has meant to them, how they first came across it, and whether it has informed their own work. At one point, we learn that Schmidt himself was introduced to the poem in a religious studies class at school, where he first read the famous story of Uta-napishti and the Flood –  an episode which sent shock waves through the world of biblical studies – and that later, at university, he became obsessed with the full text when he read it as an aspiring poet.

In his Introduction and a couple of preliminary chapters, he sketches out the historical background to the poem and the details of its discovery, praising the heroic efforts of the philologists who managed to decipher the cuneiform script and the two linguistically unrelated languages, Sumerian and Akkadian, in which the various fragments of the poem are written. Schmidt is at pains to emphasise that there is no single canonical text for Gilgamesh as there is for the Iliad or even more so for the Aeneid, which was composed by a single historically verifiable poet. Thereafter, he starts looking at the ways in which such an ancient text, written in obscure languages and deriving from a civilisation so far removed from our own, can still speak to us:

“Gilgamesh: is it the first road novel, the first trip to hell, the first Deluge, the first heterosexual romance in poetry? Does the love that dare not speak its name very nearly speak its name here for the first time? The poet Rod Mengham reflects, ‘I love the fact that the earliest literary text we have enshrines friendship as the bedrock of our negotiations with the world and time.’ Gilgamesh also gives the first account of the uneasy triumph of nurture over nature.”

Cleary, this is not a dry-as-dust exegesis or a bare-bones student’s guide. Schmidt looks at the text as living literature and his enthusiasm is infectious, suggesting that the reader may discover here archetypes anticipating Kerouac’s On the Road,  the various descents to hell of Homer, Virgil and Dante, the flood in Genesis, perhaps even Ballard’s Drowned World, and the story of David and Jonathan in the Book of Samuel. Fascinating, too, is the way in which  Schmidt explores the fragmentary nature of the poem and the friable material upon which it was written. It is literally a jigsaw pitted with lacunae, our understanding of which is constantly being updated by new discoveries. Moreover, it lacks the centuries of scholarship which have been lavished upon Homer and Virgil. Knowing so much less about Gilgamesh and the literary tradition from which it derives, we have more scope to search for our own meanings and are frequently compelled to do so. To quote Schmidt: ‘We are not dealing with a single world and time. We are not dealing with a single language.’ This is why, perhaps, it seems to appeal to our postmodern sensibilities.

Having placed Gilgamesh in its historical context and hinted at how we might approach it, Schmidt takes us through his text, tablet by tablet. He gives us a detailed resumé of the plot and introduces the main characters, exploring many issues of interpretation and referring along the way to many of the different English versions. He also heads up each of his twelve sections with an excerpt from one of the many translations or adaptations of the poem, thus creating what amounts to a richly varied and exciting Gilgamesh anthology. There are different ways in which one might make the most of these chapters. One might read them straight through before or after reading a translation of one’s choice. It might also be useful to read them, or return to them, one by one as one works though each section of the poem.

The Gilgamesh narrative is quite long and episodic. The world it depicts is unfamiliar and its protagonists have names that take some getting used to. Throughout this section Schmidt proves himself to be an affable and well-informed cicerone and it is important, in the first instance, to get some sense of where the narrative is heading. We first meet Gilgamesh himself, the wayward king, who is transformed by suffering into a wiser one. Then there is Enkidu, the wild man of nature, who is seduced by Shamhat, a hierodule or sacred prostitute, and lured to Uruk, the first great city, where, after their initial combat, he becomes the king’s inseparable companion. The pair hunt down and kill Humbaba, the monster of the Cedar Grove, an articulate and sympathetic character, who is eloquently described by Schmidt as the ‘defender of his luxuriant, perfumed and peaceful kingdom.’  How striking it is that in a poem written at the dawn of urbanisation there seems already to be a conflict between civilisation and the natural world. Could anything be more up to the minute as we ponder the state of our planet and the survival of our race?  Soon after this savage deed Enkidu dies so that the remaining episodes of the poem are devoted to Gilgamesh’s grief and his search for enlightenment. Rainer Maria Rilke, one of the earliest admirers of the poem, referred to it as ‘das Epos der Todesfurcht,’ the epic of the fear of death, and described his experience of reading it as ‘ungeheuer’, ‘tremendous’ or ‘overwhelming’.

In his concluding chapters, Schmidt examines in more detail the poem’s reception and the ways in which it has inspired modern readers and, in particular, he looks closely at many of the English-language versions and adaptations it has spawned. His comments are concise and cogent, giving us many valuable insights into the art and craft of translation. Beyond this, however, he also makes his contribution to an ongoing debate about the value and purpose of translation when, in the anglophone world, first-hand knowledge of languages, whether ancient or modern, is in serious decline. It takes time to achieve even a basic competence in any language and few will have the leisure to gain a reading knowledge of the languages of Gilgamesh. Increasingly though, anglophone readers only ever gain access to foreign literature through the lens of their own global language. Consequently, it is all too easy for them to fall into the trap of thinking that what they read in their own language is somehow entirely synonymous with the original. Latin and Greek disappeared long ago from most schools and even the major European languages are under threat in our universities. ‘Virgil’ in English is not the same as Publius Vergilius Maro in Latin. The same could be said about such widely read poets as Baudelaire, Rimbaud or Rilke. In one chapter, Schmidt quotes the scholar and critic, Gabriel Josipovici who takes to task ‘translators’ who have no direct access to the language of their originals, asserting that ‘imitation as against informed translation is a license for laziness …’ whereby ‘… the poet as imitator feels that the original has merely to act as a trigger for his or her own instincts.’

Perhaps, then, the best we can do with Gilgamesh is to take Schmidt for our guide and read the poem in several of the available versions. To get a basic sense of its narrative one might start, as many have, with the first Penguin Classics version written in prose by N. Sanders and then move on to one of the more recent scholarly versions by Andrew George, also in Penguin Classics, or Stephanie Dalley’s in Oxford Classics. Thereafter, the possibilities are legion from Stephen Mitchell and Jenny Lewis to a plethora of ‘versions’ less closely tied to the original. Michael Schmidt’s Gilgamesh, the Life of a Poem, is stimulating, informative and elegantly written. It is to be hoped that over time it will be recognised as an indispensable guide for all future readers of Gilgamesh, a great work of art and one of the cornerstones of world literature.