Olga Zilberbourg | Like Water and Other Stories | WTAW Press: $16.95 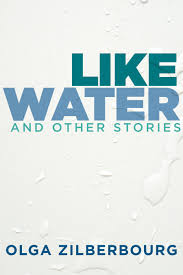 In an era of ‘short shorts’ hailed in by the venerable Lydia Davis—and culminating in ‘the fragmentary’ in the recent Nobel Prize-winning work of Olga Tokarczuk—one wonders if there remains space for a new collection of shorts: stories that up-end expectation and offer distinctive voice and lesser charted areas of exploration. San Francisco-based, Russian émigré writer Olga Zilberbourg, in her first story collection published in English, allays that concern. Zilberbourg is author of three Russian-language story collections; her fiction has been widely published in esteemed US literary journals; and she has won numerous prizes, including the Willesden Herald International Short Story Prize in 2016. A native of Leningrad, raised in St Petersburg, Zilberbourg moved to the US in 2006 to study at the Rochester Institute of Technology, later earning the MA in Comparative Literature at San Francisco State University.

In the remarkable Like Water and Other Stories (WTAW Press), released in September 2019, Zilberbourg offers a collection of shorts that call us to query our sense of time and place, mortality, and most especially identity. Her topics range from migration and mobility, to parenthood and miscarriage; settings feature rural Russia to urban America (Rochester, NY; San Francisco; among others). Global place/displacement serves as a centrepoint of the collection, making this volume particularly timely. Yet it is Zilberbourg’s play with the story form in this collection that draws us in, inviting a re-consideration of how collections can at once reveal substantive stand-alone works and generate a body of work united as a whole. The blend of ‘story play’ in combination with themes that reverberate in these times makes this a collection especially rich and worthy of reading and contemplating.

The collection opens with ‘Rubicon’, the story that remains my favourite (‘Ada at Twelve and a Half’ runs a close second). ‘Rubicon’ establishes themes of time, parenthood and the chaos and uncertainty it can bring up in (or into) our lives. It features shifting time-frames, lending the piece a Borgesian feel in its play with time: ‘Behind the wheel was this kid I used to be close to in Russia, back in the 1990s, still seventeen on this day in 2018’ (3). The unnamed narrator is collecting her preschool-aged child when she encounters her former classmate. He hands her a mixed cassette tape, the kind people were making in Russia decades prior. But that isn’t what’s shaking her world; rather it’s her fear of the ‘nameless earthquake of the future’ (the story is set in San Francisco), reflecting both her interior and exterior worlds. The opening sentence prepares us for what this collection will be about: ‘The spring came on hard and much too early this year, which must be why the dimensions of reality shifted’.

Parenthood is a central theme in this collection, and unabashedly so. Zilberbourg foregrounds this in her ‘Artist Statement’: ‘[These stories] invite the reader to consider the way becoming a parent turns one’s lived experience into a battleground for potential identities’. (One wonders if Deborah Levy’s opening to Things I Don’t Want to Know (2013)—her response to George Orwell’s 1946 essay, ‘Why I Write’— may have given writers like Zilberbourg permission to write the unpopular topic of writing and motherhood.) Zilberbourg’s stories about parenthood offer up the undisclosed, ‘things [we] don’t want to think about’ in the realm of parenthood, setting a new paradigm for the field, or at a minimum establishing the topics as legitimate and even necessary. This comes as a welcome relief. Zilberbourg’s stories defy simplistic retellings of the experience of parenthood, refusing the genre’s tropes by featuring same sex couples, ambivalent mothers, husbands seemingly (if uncomfortably) outside the parental experience, and women returning to work as parents managing altered senses of identity. In ‘Priorities’, protagonist Dawn reflects on her boss: ‘He didn’t like her. It wasn’t only the age and the decision to have the second child, whom he had once described as her “redundancy plan” ’. Zilberbourg’s narrators, though, remain effectively neutral, giving greater power to the messages of her words; the effect is to leave us understanding that none of these characters has remain unaltered by the ‘earthquake’ of parenthood.

If this was not Zilberbourg’s intention, it remains a happy outcome of the work. Yet the collection also extends into arenas that—apart from charting the impact of parenthood—run headlong into crucial and much-recognised contemporary concerns of the experience and (sometimes hidden) costs of transnational movement. Witness Tokarczuk’s Flights and Valeria Luiselli’s Man Booker Prize-long listed Lost Children Archive. Stories in this vein reveal Russian history and contemporary culture; these traverse the ‘return’ (‘Doctor Sveta’), the ‘mother country’ childhood that has vanished (‘The Swallow’) and the impact inter-generationally of migration (‘Cream and Sugar’). (There is a nod too to fairy tale motifs in ‘Sweet Porridge’, with food and its role in culture emerging throughout the collection.) A recurrent theme is the refusal to surrender claims on a daughter’s decision to progenerate and/or the pressure to produce (‘My Mother at the Shooting Range’, ‘How to Deliver a Genius’). One wonders if migration and geographical distance between family members (among women especially) have only complexified such issues or at least raised the stakes.

Zilberbourg’s stories often feature young narrators, itself defying some traditional norms in the story form; but that doesn’t mean the themes remain exclusively in the domain of children. As essayist Sinéad Gleeson noted at the 2019 Manchester Literature Festival, ‘An essay is very rarely about one thing’. These stories too are inevitably about far more than one thing. ‘My Sister’s Game’ seems initially to chart young people coming of age through a badminton game, but swiftly veers at its close into gender, as narrator Marina recognises the divide between the boys and the girls on the playground: ‘This was no longer my sister’s game. Thinking back on those summer evenings spent playing together, I have to make a mental effort to remind myself that for a long time we’d been playing without the net’. (141) That story’s end effectively plays with time, as her closing sentence juxtaposes the young women’s past against a gendered future, yet to be played out.

The short shorts format here lends itself well to this collection. ‘Her Left Side’ is reminiscent of a Lydia Davis piece, quirky and amusing in its exploration of left- versus right-side sleeping in pregnancy, whilst adhering to ‘microfiction format’. It is here that the collection most plays with form, as Zilberbourg places her one-liner shorts and brief paragraphs discreetly after stories that chart related terrain; ‘Email’, following ‘Legacy’, seems to extend that story’s parenthood/work themes, querying what constitutes the beginning and end of a story arc. As the ‘Artist Statement’ reveals: ‘Placing the brief, one-line or one-paragraph characters sketches and thought pieces next to the more conventional short stories, [Zilberbourg’s] writing highlights the process of becoming’. The pieces stand alone in their own right. But adherence to related themes suggests that Zilberbourg is doing more; ‘becoming’ evokes birth, growth, evolution, change—all core themes linked to time, which remains an organising principle of this volume. As she notes in the ‘Artist Statement’: ‘Typically, we think of published stories as “finished”—but, as most writers know, a “finished” story is a kind of fiction. In the process of maintaining a dual, bicultural identity, the artist never fully adapts, never fully belongs, never stops becoming. She keeps growing—alongside her children’.

‘Rubicon’ may have left me transfixed by its play with time, but it was the title story, ‘Like Water’, that left me reflecting on what Zilberbourg’s book title meant. The collection ends on ‘Gift Exchange’, in which the narrator reflects on a kind of new ‘arrival’ and the sunnier side of migration, you might say. But the collection’s real ending for me was in the penultimate story, ‘Like Water’, in which an elderly Russian émigré couple are ill at ease with drinking water over tea, despite the protestations of the physicians they visit in the US healthcare system. This insightful piece offers a telling reminder of how it is perhaps the smallest-seeming aspects of global movement and re-settling that re-shape us (or don’t).

Like Water and Other Stories resonates because such stories isolate the unseen nuances of global relocation, including the refusal to change, suggesting that identity in the face of migration is maybe not as fluid as we sometimes hope. Zilberbourg will not leave us unmoved by such nuances, though; for those of us who are émigrés (by choice) may want to believe global movement will ‘free’ us from prior difficulty or hardship rooted in our prior nation. But in this collection, Zilberbourg reminds us that the change in our world is (‘like water’) all around us; and in the smallest of details, we are forever chained to where we’ve come from.

For interested readers, Olga Zilberbourg’s new blog on post-Soviet literature in and outside the former Soviet Union can be found at: https://puncturedlines.wordpress.com/