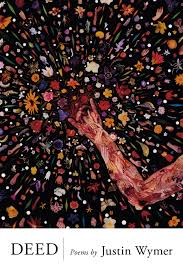 The title of this, Justin Wymer’s first book, certainly reflects the involving, driven quality of the poems between its covers. Wymer is not afraid to push the reader. And he does this not only in the subject matter of the poems but also in the impacted quality of the language. That impacted quality is not only in the syntax of the sentences, but is also in the vocabulary of the poems and Wymer’s often fearless breaking of line endings. In the poem, ‘Vinculum’, Wymer writes of a jay, ‘As is customary in times / when the beak scrapes the salt from the rinds it has / left, there was brittle air between the bright / flags dropping round / staccata.’

I had to look up ‘vinculum’, and I have no objection to that; if poetry doesn’t pull vocabulary back into its ambit then its accomplishments are much diminished. ‘Vinculum’ is the Latin for a bond, apparently, and in birds it means a kind of tissue uniting tendons in the bird’s foot. It can also mean the line over some elements in a mathematical equation, to suggest that those elements are united. Elsewhere in the poem, Wymer uses the words ‘fovea dent’ and describes cicadas as ‘cantalating’. This kind of slightly rare language isn’t used often in the poetry; it is usually embedded in much simpler vocabulary which itself is embedded in the kind of impacted syntax, I’ve mentioned.

In the sentence, I’ve quoted above, Wymer assumes what is ‘customary’ at the start of the sentence, but we have to wait until ‘there was a brittle air’ for that ‘custom’ to become clear. The sentence reaches out to the bird by bringing the ‘beak’ in, then moves out to the ‘flags’, which we have to assume are ‘real’ flags of either the flapping fabric kind or are a flower such as, perhaps, a flag iris, which are ‘dropping round staccata’. It needs to be said that this poem, and many others in Deed, are filled with sounds. And part of Wymer’s achievement in the book is to create a kind of sensory overload in the poems. Wymer’s project is, in part, to bring the all five senses into play in his writing. Wymer is unafraid to evoke another slightly unusual sense, proprioception, that sense we have of the body in movement. Thus, the sentence mimics ways in which we perceive.

As we can see, Wymer’s breaks line endings against the natural phrasal or clausal structure; for example, between the adjective ‘bright’ and its noun ‘flags’. And in this poem, as in many others in the book, Wymer moves between very short lines and very long one. Thus, the poems usually have a heady, almost granular, density, in which the rhythm and pacing of the lines is part of Wymer’s attempt, it seems, to move, almost corral the reader through the surface of the text.

In part, too, this moving of the reader corresponds to the way the poems are built about evocations of the state of almost Heraclitan flux in Wymer’s deeply sensual world. In the title poem, Wymer asks, ‘Should I wait / my turn to liquefy into sick bluish mud and or should I remain / clipped to secret greenery, staid in the latticework / of eyes I choose not to meet.’ Wymer’s poetry can sometimes seem a little obsessed with bodily decay, and he seems to suggest that the body is almost a kind of charnel house of its own making; the body a prison to itself, trapped in the flux of completion into decay. Here his writing is precise and evocative, bent to its purpose.

This is a compendious book arranged in four parts. In parts two and three, Wymer includes ‘letters’; addressed to ‘Dear E’ they are signed, ‘Yours, J.’ If we assume that the ‘J’ here is Wymer himself, these letters are part of the overall sensual texturing of the book as a whole. If, elsewhere in the book, the author does not appear to be far from the address of the poems, here, the presence of the writer feels explicit. As noted, however, the address of these poems does not feel at huge variants to the address of the other poems. The ‘letters’, if indeed that is what these are, are as quirky and mired in the senses as the other poems in the book. In one such, Wymer writes, ‘Creatures scud to feed on or fuck one another, then circle round to lie in the same space. Fear indistinguishable from the constancy of bite, the body’s need to consume pieces of the place it takes rest, so that it might rest.’ Actually, as I typed that I wondered if there was a ‘to’ missing between ‘takes’ and ‘rest’, or, perhaps, a ‘where’ between ‘place’ and ‘it’. Wymer’s letters are part of an particularising and idiosyncratic response to ‘world’. The poems reach out of the book whether in the form of the letters or more generally, and they ask the reader to look more closely at their own relationship with that world. It will be interesting to follow Wymer into a second and third volume.