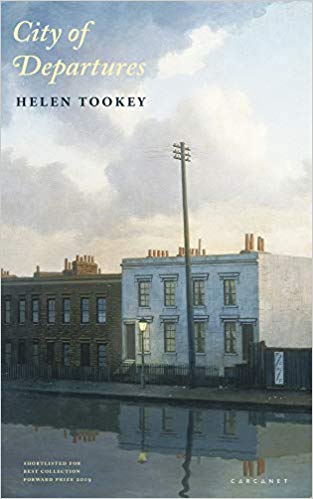 Helen Tookey’s new collection, City of Departures, begins with the poem “Equinox”, describing the point when the “The year is balanced, for a moment only”, and the days are as long as the nights. This fragile, fleeting state of equilibrium is delicately poised and at risk of breaking. The poem recounts moments of “Disequilibrium”, which threaten this perfect balance: a dream in which “twins were fighting, / each hell-bent on her own direction”, a text message in which “You […] tell me you’ve broken a cup, / burned the toast, melted the handle / on the stovetop coffee-pot”. These small moments are suggestive of what lies beneath the harmony implied by the poem’s title: “We say equinox / as though the word were a stay against chaos, / a blocking spell against all the unmakings / massing like static, heading our way”. It is unclear whether this chaos refers to political turmoil, to the indecisiveness of Britain on the brink of Brexit, or to a sense of chaos and uncertainty that has always existed beneath the surface of the everyday, and perhaps it is both.

City of Departures is Tookey’s second full-length collection, and is short-listed for the 2019 Forward Prize for Best Collection. The poems are finely crafted and closely observed, describing somewhat unsettling, dream-like landscapes and spaces of memory, deserted streets in European cities, or taking artworks and objects as inspiration and points of departure.

One of the collection’s central themes is the relationship between the verbal and visual, exploring and illustrating the links between poetry and the visual arts. Many of the poems are themselves painterly, deftly depicting a particular scene or mood. The title, City of Departures, refers to a prose-poem of the same name in which the speaker finds herself wandering in an unnamed city. It feels as if a painted scene is being brought to life: “When I stepped out of the house the air held rain, the scent of it, the taste. The light was bruised and yellowish. A blackbird was singing, very clearly, his song amplified by the coming rain. The scene felt familiar, already lived-through. The caption was Morning in the city of departures”. This city is a strange, liminal space of in-between, of things that have happened, or are about to happen. The speaker is occupied by thoughts of someone who is both present and absent: “You didn’t appear and yet you were present, if only in the feeling of missed connections.”

Other poems paint scenes that are similarly caught between the real and the imaginary, between sleep and waking, or rather, they demonstrate the often uncertain boundary between the two. “So did you maybe dream it – that wrecked boat / uncovered by storm, by shifted sand, / for just one day?” begins “Boat”, a poem about a mysterious wreck which appears on the beach one day, acting as a make-shift shelter and sanctuary from the emotional turbulence of a break-up. In “Being Mary Lennox”, Tookey takes inspiration from the opening of Frances Hodgson Burnett’s children’s classic, The Secret Garden. The young protagonist Mary-Lennox wakes up to an empty house after her parents have died in a cholera epidemic in India, and again the “scene”, as re-imagined by Tookey, is dream-like: “Everything is yellow, because of the heat. / You are thin and sour, like spoiled milk, / like bad-wishing. A yellow girl. A thin little thing.”

The question of representation, particularly how to represent the lives of girls and women, is a thread the runs through the book. Several poems re-imagine artworks by focussing on the female subjects that they depict. In “Letter to Anna”, Tookey constructs a narrative to accompany a melancholy painting by Danish artist Vilhelm Hammershøi of his sister. In Tookey’s poem, we are given access to Anna’s perspective only through sections of letters written to her, not by her, and descriptions of her portrait, fragments which we must piece together to imagine a story: “Dear Anna, I look often at your picture, though I could wish he had not made it quite so sad – that look in your eyes, so far away”.

These poetic meditations on art culminate in the final section of the book, which is written in the form of creative non-fiction, titled “Skizzen / Sketches”. The section expands on, and clarifies, many of the central themes of the poetry. We are taken on an aesthetic tour through European cities via museums and artwork. Through Tookey’s careful and sensitive description, we are introduced to the work of neglected women artists such as German-Jewish painter Anita Rée and Austrian poet and lover of Paul Celan, Ingeborg Bachmann.

Again, questions of representation come to the fore. How to represent a subject while retaining a sense of their own subjectivity? How to capture “this movement, this constant transformation” of visual art in poetry? For Tookey, a poem by Bachmann, “Bohemia Lies by the Sea”, best captures this refusal “to stay still” as well as a “refusal of limits, of borders”. In Tookey’s words “It ends with a hopeful vision of belonging as not-belonging”. This rejection of borders is a fitting ending to a collection that challenges formal and aesthetic boundaries, and engages with a range of European artistic influences to offer a vision of “belonging as not-belonging” in the face of uncertain and chaotic political times.