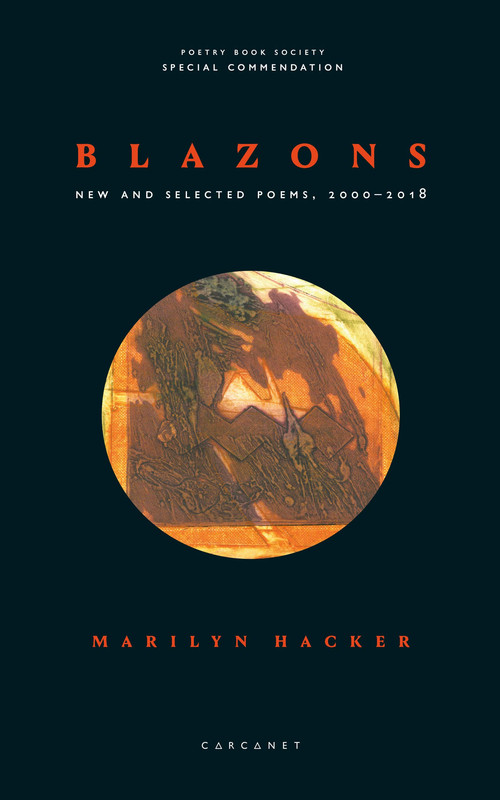 There is a detailed, but never dry, attention paid in the poems in Marilyn Hacker’s new, Selected; an attention is not only to the things she observes, but, and this is a huge part of Hacker’s success, there is a real empathy to the other people she writes about and for. So, the formal profusion of Hacker’s poems, the formal diversity which is a kind of hallmark of her poems, the range is from sonnets and canzones, to her more favoured ghazal, allows her to develop warm, fluid, narrative portraits of people, as well as more staccato investigations of places and the reflections such places create.

‘A Farewell to the Finland Woman’, Hacker’s elegy to Karig Sara, Hacker adumbrates a kind catalogue of Sara’s achievements starting with the ‘Two thousand orphans, real ones and children of / Jewish deported parents, so you and your / ill-sorted Red Cross wartime colleagues / made it your business to feed and save them.’ There is an unadorned quality to these lines and much of the rest of this sweeping poem. For example, a following verse describes how, ‘Interned in ’53 as a Trotskyist / you underwent a double mastectomy / for ‘lumpy breasts’: chloroform was the / one anesthetic used in the gulag.’ And although that plain quality seems to distance both the writer and the reader from the experience, what it does is to emphasise the personality of Karig Sara. Someone who clearly just gets on with things and feels little in the way of self-pity under all these different circumstances.

This unadorned empathy and Hacker’s formal accomplishment establish an imprint on the page; an imprint which is never heavy or cloying but beds the poems on the page, makes them sit with solidity and a kind of inevitability. Hacker is a poet for whom the trajectory of the poem is patiently, but intensely controlled.
Another type of poem in this rich ‘Selected’ is the type of poem which meditates on the nature of place, and how we experience that place. The beginning of ‘Le Sancerre: September’, for example, begins:

September morning schemes of the possible:
the open sky, the late japonica, the blue day.
Noon approaches on the interplay
of what’s imagined, what’s forgotten, will
stay in the focus of a gaze that’s still
fixed forward. There’s an afterwards, to say
the rest, to mingle meanings. Let me stay
where I am, on the arc, in the break of the interval.
It rained enough through August that the trees
In the square touch a green cusp of clarity.

The opening line with its metaphorical opening becomes specified in line two, with the adjectives just vague enough to suggest possibility, but just concrete enough for the reader to visualize them, too. The poem then moves into a kind of metaphysics which, again, plays on the idea of noon as the dividing line between the forgotten past and the imagined future. The latter, however, is where the narrator wants to ‘stay’ both on the arc but also on the break. Hacker’s abundant intelligence works the idea of possibility and where it sits both literally and metaphorically. Thus, the ‘world’ offers possibilities which the mind, ‘on the arc, in the break of the interval’, can choose to move with or, in this case reject. Here, that, perhaps, ambivalent place proves enough, as the trees are enough in their clarity.

A notable addition to this Selected are an abundance of very elegant translations from either French or Arabic. As with her own poems, the keynote to Hacker’s translations is, clearly, a deep empathy with the poet she is translating. Such an empathy in translation ought to be obvious, but with Hacker, it inspires that warm elegance. A number of the translations are of Arab writers writing out of ‘resistance’. The Syrian poet, Yasser Khanjer, reflects on the language used by a jailer in a Syrian prison; a jailer guarding political prisoners, ‘How does he shift the letters on his lips / without one of the two ‘enemy’ languages breaking […] – a language with malleable meanings / engrossed by the charms of exegesis, / barefoot, like a dancer bent backwards, / her anklets linking the text’s foot / to the sultan’s desire.’ In the midst of incarceration, the mind is able to see not only the irony of having to respond in the language of the occupied, but also the ways in which even on the lips of the jailer, the language has beauties which cannot be destroyed. Although the irony is doubled when the language, like the dancer, is tied to the desire of the oppressor. Hacker’s facility is, therefore, not just on a formal level, but reaches through to the centre of style and address.