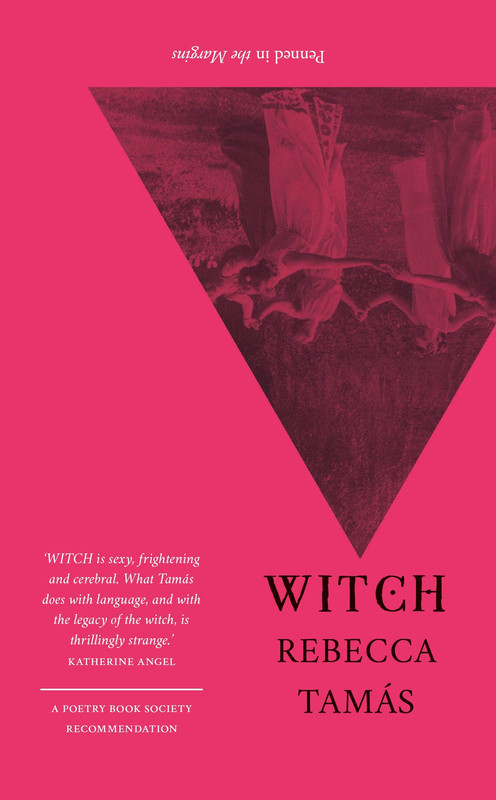 Rebecca Tamás’ WITCH answered a question I didn’t know I was asking.

Before reading WITCH I heard the electric crackle of its imminence: from the social media marketing campaign and Poetry Book Society recommendation, to the sold-out pre-publication performance in Manchester into which I failed to finagle my way. And I read the blurbs promising sex, strangeness, feminism, ecology, history, obscenity, mysticism and the occult: ‘poems as spells…hexes that cling to your body like sweat, full of a messy violent joy’. There was a lot going on around the publication of Tamás’ first full collection. And as an object the book, published by Penned in the Margins, proves to be a lovely thing: its cerise cover is decorated with an inverted triangle—symbol of water, the moon, feminine energy and female genitalia—within which a group of women dance, to its cinder-rose end papers. Tucked inside the first few pages I find a feather and a tarot card (Rider-Waite’s the 8 of Pentacles). I put these artefacts to one side and began to read, hoping to love WITCH but aware of the pre-emptive prickle of disappointment that can be aroused by heightened expectations.

The collection is comprised of a sequence of 21 poems about a character—the Witch—interspersed with spells and bookended by interrogations and hexes. It opens with a /penis hex/. Although my reading rule is to put myself into the poet’s hands, to allow them to lead, I did not want WITCH to begin on a phallic note. If I had trusted Tamás and read her matter-of-fact and compelling first lines I would have been immediately reassured, for ‘the hex for a penis isn’t really all about / the penis’. Instead, looking for another way in, I leafed restlessly back and forth catching glimpses of Cleopatra, Iphigenia and Lilith, wolves and woods, pornography and mint pantsuits, sunlit jars of honey, bonfires and blood, fucking, an absence of punctuation (largely), some CAPITALIZATION. I wanted these poems to be messy and disturbing, to knock me off my perch, to deliver on the promise of ‘a small, bright, filthy song’. WITCH’s much heralded fierceness led me to wonder if the approach to the idea behind the collection felt like a place I had visited before in the company of Sexton (who provides one of the book’s epigraph’s), Rich, and Duffy. I wondered if we should fear repeating ourselves on this well-travelled path. What I did not wonder was where the question had come from. I knew where the question had come from. It is a question only a woman who has internalised a great deal of patriarchal shit would ask if women have anything new to say about the historic persecution and genocide of other women. Men have made art addressing the same tireless issues for millennia without ever asking themselves: has this maybe been said or done before?

Orpheus went back to get Eurydice from death as we know

her song is still down there somewhere

On finally reading WITCH from beginning to end, from /penis hex/ to \cunt hex\, I learned that Tamás’ poetry was answering a question I didn’t know I had been asking. I found (and was discomforted by the fact) that the poems were saying out loud the things that I and my women friends tell each other on nights when we sit around a kitchen table drinking, laughing and hexing: that poetry is spell-making; that poetry is a woman’s art, even if men have taken it as theirs and held onto it fast for millennia. But these are things I have never said out loud and so, as I read WITCH, I experienced a rush of emotions including embarrassment—to meet these ideas out in the world, to encounter them as poems, written in such violent, visceral language. As I read WITCH I become insatiable for the histories Tamás reveals. I devoured her poems, one ‘small, bright, filthy song’ after another. I discovered that I needed WITCH the way I needed, without knowing until I found them, Hilma de Klint’s paintings, or Jane Campion’s films, or Joni Mitchell’s album Blue. As a woman in the world I was ravenous for these poems; I was waiting for them patiently and impatiently, and now here they were.

A Taste of Honey | The Lowry | reviewed by Peter Wild
Editorial