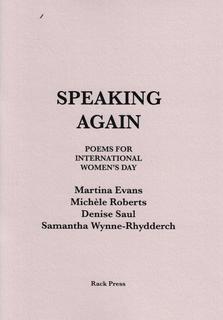 Even though each poet in Speaking Again: Poems for International Women’s Day has a slim selection, four quite individual voices are present in this Rack Press pamphlet for International Women’s day. The importance of those voices is emphasised in the epigraph that fronts the volume: ‘The few who dare, must speak and speak again / To right the wrongs of many.’ Michèle Roberts begins the pamphlet with the suitably titled ‘The Struggle Continues!’. This is a short sequence of four sections; the first of which, ‘A Grammar of Streets’ describes a walk through the East End of London, and the heightened variousness of that world, from ‘crazy- / pavement prophets /(women on pedestals, women as diamonds)’ to ‘a field of Spanish-Jewish bones.’ The result of the conversation over these worlds means that ‘We twist our threads / of history together, knot in / our looping, different, heretical selves.’ This is the celebration of difference, which is carried on through the other three parts with their different locations. In each, Roberts uses her novelist’s eye and her poet’s sense of close organisation, to offer tangy evocations of place that open out into deft evocations of the people that inhabit them. Denise Saul presents four, short prose poems that describe a stay in what might be a mental hospital. The poems narrate with piercing fluency the dissociations that the narrator perceives in her surroundings, ‘I never thought that I would make peace with noise: chimes of the midnight bell, traffic and low-flying planes remind me that God is a never-ending-white ceiling.’ The narrator’s situation does not improve over these four, short pieces, and Saul’s gift is to create, over a tiny canvas, a scenario which is poignant but completely lacking in self-pity.

Samatha Wynne-Rhydderch’s contribution is four dramatic monologues; the first of which is a woman commenting on stays and what women will do to get an hourglass shape, ‘As if sand might run through us, / weight our feet until we’re turned upside / down again.’ What such society might have viewed as ‘weighting’ is clearly a misjudgement, as Wynne-Rhydderch describes the deaths of three women involved in accidents in the stays. Her final poem, ‘What Can Happen if You Never Move House’ describes what does happen when you finally excavate the drains!! Martina Evans completes the pamphlet with four first-person poems in which Evans, herself, appears to be the ‘I’. The first two poems are depictions of the domestic absurdities that accrue in the relationships between teenagers and daughters and mothers. The final poem again concentrates on the bathos of the A&E nurse who is having problems with her shoes. Evans, like Saul, pulls poignancy out of the most bathetic situation, and in doing so frames the emotional range of women’s lives in profound and involving ways. 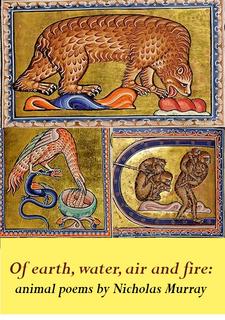 Rack’s publisher, Nick Murray has produced a pamphlet of animal poems which are, in many ways, quite the same work of the deft producer of satires on contemporary politics, Murray has published recently. That similarity is due to his acute sense of the responsibility humanity has to the animal world. The animals range from the ‘Aardvark’, with Murray playing on that animal’s position at the start of the alphabet; to the Salamander, ‘the godly [need] as proof / that righteous souls survive the holocaust.’ ‘Kangaroo’ evokes the poet’s guilt at his being on a bus in Australia which hit one. A badger, too, is likely to be victim of humanity’s attachment to the motor vehicle. And the bear, viewed, chained to its owner in Eastern Europe, is also seen with undisguised compassion. Thus, Murray the political poet who calls upon our political leaders to account for their responsibility for the current ‘Dog’s Brexit’ we find ourselves in, is demonstrably the same poet who feels our responsibility towards the natural world just as deeply.

In the midst of this poignant and never self-pitying disposition of guilt, there are lovely and piercing evocations of the natural world. In the rowdy world of lambs, the ewes are ‘their stoic parents, like the aged without teeth, / munch with loose jaws, and lazy eyes / take all this in; the cries, the frisky jumps.’ The wagtail, ‘freezes / as if, just then, it has / retrieved a lost idea / then, having thought, moves on,’; the punctuation and lineation mimicking the motion of the bird. The Pelican, too, brings out the technician in Murray, with the poem’s warm, short lines and full rhymes, ‘and that sexy tuft’s / the sort of thing that Cruft’s / would reward in a poodle. / You’re a child’s doodle.’ This is a strong, adroit addition to Murray’s poetic oeuvre; its poems memorable and good. 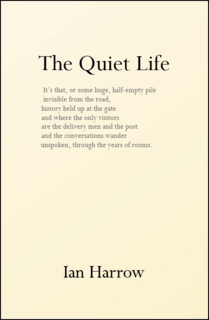 The final pamphlet under review here is Ian Harrow’s The Quiet Life. The ‘Quiet’ here might actually be the quiet authority of Harrow’s writing, which gives each of the poems in this pamphlet, a warm inevitability. And although the prevailing note of this collection is the ruminative life of the older man moving in and out of health, there isn’t a moment when the poems are remotely self-pitying or self-absorbed. Harrow is, essentially, a contemporary metaphysical, reflecting, mostly, on the process of aging. In addition to the calm reflection which drives these poems, Harrow is an adept and adroit observer, so the poems are threaded with a grounding sense of things: as in this Mahon-esque section from the poem entitled, ‘The Unadvertised Life is not Worth Living’:

It’s that, or some huge half-empty pile,
Invisible from the road,
History held up at the gate
And where the only visitors
Are the delivery men and the post
And the conversations wander
Unspoken, through the years of rooms.

That quiet authority imbues each of these poems with a completeness which makes the pamphlet substantial and satisfying.