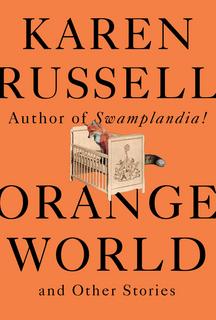 There are readers who feel a certain prejudice against special effects. Who might read Beloved for instance, as a historical novel, and be more moved by the story of Sethe, and the atrocities of slavery, than the device of the dead infant who is brought to life in the narrative; by the historical upheavals of Chile than the paranormal powers of Clara or Rosa’s green hair in House of Spirits, the battle for survival in Halldor Laxness’ Independent People more than the ancient curses and magical spells.

Karen Russell’s work is often located within the tradition of magical realism. Russell is based in Miami, and the influence of Hispanic magic realism may be present in a number of the stories in Orange World, Russell’s third collection. In the first story of this collection, two young women follow the gold rush to Oregon where a vast lodge has been built. It is only accessible by a chair lift, ascending 7,250 feet. At the summit they are taken to the lodge, which is compared to a palace, or a cathedral, where ‘amethyst chandeliers sent a lake of light rippling across the dance floor’ and a large number of CCC workers wait for the party to begin. The narrator, Aubby, gradually realises that these young men are all dead.

News of their own death has not reached these young workers, and as in a dream, Aubby and Clara fear that if their knowledge is revealed, something fateful will happen, so they dance with the dead boys and dissemble. Their lives thus far have been a fabrication after all, they have given false names and histories, adopted different personas. In their backgrounds there is violence and suicide, but they have become opportunists and scavengers, ‘prospectors of prospectors.’ Yet when Aubby becomes attracted to her dead boy, she ‘tells her ghost a true story’ and feels her life ‘falling into place.’ Still, at the end the girls consider this to be their ‘greatest heist’; in the story, there is no Carveresque epiphany, but an accumulation of meanings achieved by layering tropes. This is a historical story with a modern voice; it references the science fiction of H G Wells, it has Gothic imagery and themes and ultimately, it is a kind of fable.

Several of the eight stories in this collection explore different aspects of love, from the atavistic, in Bog Girl; A Romance, to maternal anxiety in the title story and a portrayal of obsessive love as the desire for annihilation or transcendence in The Tornado Auction or The Gondoliers.

But the referential quality is nowhere more apparent than in the fourth story, Madame Bovary’s Greyhound.

In this story, Madame Bovary’s greyhound is afflicted by the ennui of her owner, although ‘Sometimes, in a traitorous fugue, the dog forgot to be unhappy, and ran off to chase purple butterflies, or murder shrew mice, or to piss a joyful stream into the topiaries.’ Even so, the greyhound gradually falls out of love with Emma; ‘her fragrance became musty, ordinary, melting into the house’s stale atmosphere.’ As Emma loses interest in life so the dog loses interest in Emma, until both woman and dog seem ‘bewitched by sadness.’

Madame Bovary was considered by Henry James to be the perfect novel, ‘supreme and unapproachable.’ It is often considered to be a definitive example of realism, its closely observed, naturalistic narrative style throwing the romanticism of its central character, Emma Bovary, into ironic relief. Russell retains the irony of the original while eschewing both romanticism and realism. In their disaffected states ‘the greyhound shat everywhere, Emma shopped for fabrics.’

As the dog makes her bid for freedom, entering the natural world, Russell creates a world that is both primeval and exotic:

Herons sailed over her head, their broad wings flat as palms, stroking her from scalp to tail at an immense distance and the dog’s mind became empty and smooth. Skies rolled through her chest, her small rib cage and her iron gray pelt enclosed a blue without limit. She was free.

Gradually the primitive supersedes the dog’s domestic role and her attachment to Emma and she begins to remember ‘what she’d been before she was born.’

In summer the dog crossed a final frontier, eating the greasy liver of a murdered bear in the wide open. The big female had been gutshot for sport by teenage brothers from Rouen, who’d been too terrified by the creature’s drunken, huntingly prolonged death throes to wait and watch her ebb out. In a last pitch she’d crashed down a column of saplings, her muzzle frothing with red foam. The greyhound was no scavenger by nature, until nature made her one that afternoon. The three cubs squatted on a log like a felled totem and watched with grave maroon eyes their orphan hearts pounding in unison.

This exact, unflinching style is combined with a lyricism that references the post-impressionism and primitivism of Rousseau, ‘Moths blinked wings at them, crescents of blue and red and tiger yellow, like eyes caught in a net,’ as well as the attention to verisimilitude of the pre-Raphaelites, who used naturalistic detail to create their fantastic worlds. As Emma lies in her bath, for instance, ‘hours fill her nostrils with the terrible serenity of a drowned woman.’ With these metaphorical shifts, Russell’s story transposes the original novel into her own surreal universe.

In this story, human tragedy and self-concern are placed within a larger, anagogic scale that ultimately dwarfs it. In part, Russell achieves this by creating a hyper-reality entirely focussed on the dog, and partly by applying an equal lucidity to both magical and natural worlds: ‘Time went slinking around the forest, slyly rearranging its shadows; now a red glow clung to the huge branches of the Douglas firs…’ The cadences never falter, the register doesn’t shift, an equal rigor and precision underly the lyricism of both the ordinary and extraordinary worlds. This consummate blending of contradictory ontologies generates its own dynamism and alchemy; in the linguistic expertise there is the sense of a broader, more comprehensive vision. Nabokov said of Madame Bovary that it was ‘prose doing what poetry ought to do.’ This can surely be said of Russell’s writing in Orange World.