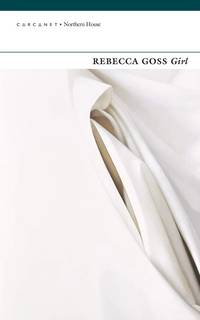 “I spent the day being Rachel” is what Rebecca Goss tells us a few poems into her third collection Girl. It is one example of the many identities of “girls” we are to meet over the collection, and the many understandings of her own identity in the reflection of others. In Girl we find multiple complex ideas of womanhood interspersed with alive and intriguing poems about the physical nature of bodies and how they experience the world.

Four years after the Forward Prize-shortlisted Her Birth, Goss has returned with an intriguing mix of poems providing a constant confrontation with other women’s bodies, as well as a juxtaposition between these same bodies and their experience in the world. The movement between colour and the draping of white found in “Something Beautiful was Created by Their Leaving” is evocative of the slow movement between identities in her poems and the gaps between them: “Draw them up / in this drapery”, she states.

The important moments for the characters of her poems include motherhood and other relationships. Often confrontational, the characters of the collection are the women she knows in detail: her mother and daughter; but also, anonymous women and responses to art and culture.

(“Something Beautiful was Created by Their Leaving”)

The cast of these poems reveals a glimpse into different kinds of love. At times Girl leaps through time, chasing the inevitability of changing experience. In “Talking about the old house” we see the house now “forsaken to ghosts,” and the recollection of these moments in the past. They observe how things have changed, they were “content with painted floorboards” the speaker notes, marking the smaller changes in their lives.

Goss’s ability to zoom into the bodies of her collection is particularly impressive and the collection itself is punctuated with shocking moments, like in “Dodgems” where the speaker “throws my body into accident.” The sudden violence, after the quietness of the poems that come before, heightens the feeling of change and evolution. These juxtapositions are also clear in the use of medicalised bodies and their comparisons to normality. In the final poem of the Pleurisy series, “Pleurisy v”, Goss writes:

The short line here allows further comparisons and highlights not only the themes of the poem, with the difficulties in gathering breaths, but the spaces between the different bodies and identities of the poem too. Throughout Girl Goss plays with these ideas of time and space to allow to reader to observe the space between different and distinct ideas.

Powerfully, the poem “Drinking Their Capri-Suns,” reveals the mixture of adult and child identities and the importance to Goss of blurring these artificial boundaries in her collection. Throughout Girl we see the themes of mother and child often. Perhaps not a surprisingly, considering Goss’s last collection centred on her own experience of her daughter’s birth and short life.

The title poem “Girl” is one of the poems that seeks inspiration from art, after Alison Watt’s “Hollow” (2009):  we find “An opening: marquise cut” and an evolution of her childhood dressed by her mother, to her own consideration of motherhood, “a somersaulting into love / that made a daughter.” The circular nature of this poem eventually leads to the final line that declaratively states “identify me as girl” linking her bodily understanding of being a woman with identity. The positioning of these different concepts of identity and motherhood allows the reader to zoom into moments of realisation of the “lawns of childhood” mixed with how the speaker states “I’ll tell her”, as she returns to the first person to talk directly to her daughter.

The themes in Girl are looked at over and over in different ways. Just as Goss considers the inspiration of physical art, she also returns to defining identity as part of a name. In “Rachel” we see the speaker becoming someone else: “I apologised in a way Rachel / would have apologised: prone to genuflection.” This is also found in “Nomenclature” where the speaker is “turning back to reach for you,” the “you” being another Rebecca Goss who occupies this poem. The identity inherent in a name is revealed through the similarities and differences between their lives.

There are also symbolic identities to be found in “My Sister Has a MRI Scan”: not only is the reader presented with the medical objects that surround this experience and “her brain recalling the child of the sea.” We are also told “she will tell me that she slipped off / her wedding ring for the first time” revealing something of her symbolic identity and the disruptions to it that take place in our lives.

Sometimes the poems drop into fact, the amounts of paracetamol prescribed for example, or the facts about law that surrounds women. That said, these factual poems punctuate the intense and unwavering emotional imagery in the rest of the collection and allow us to reflect on the lenses she has placed over these same identities. “Was she bathing / as you raised the lens” she asks, considering how watching and being watched change our behaviour and construct our identities.

Girl is intense and unrelenting in its pursuit of different kinds of identity for women. Goss’s ability to describe how complex relationships are built in the reflection of others occupies a lot of the collection. The poems add to this feeling of the importance of the female body, and it asks if these bodies are fragile or strong. Goss works at changing how these stories are told in poems and moves through the difficulties of defining who these identities of womanhood belong to “hanging onto my girl voice” (in “reverse-charge call”) and further grasping what she considers is the identity of being a “girl.”